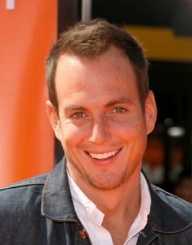 Will Arnett is an actor, voice actor, and comedian.

William “Will” Emerson Arnett was born in Toronto, Ontario, on 4th of May 1970. His parents are Edith Alexandra and Emerson James Arnett. He has two older twin sisters and a younger brother, and his family goes back many generations to Winnipeg, Manitoba.

Will Arnett attended Lakefield College School in Lakefield, which then was an all-boys boarding school. When he was sixteen, he was refused entry after causing too much trouble. He went to The Subway Academy II, which the school had allowed him to take theatre classes. His mother encouraged him to channel his energy into acting, and he eventually graduated from Leaside High School. Will dropped out from Concordia University, Montreal after one semester.

In 1990, Will Arnett moved to New York City to study acting at the Lee Strasberg Theatre and Film Institute. Will auditioned for commercials and appeared in Felicity Huffman's independent film Erie, which was filmed on the Erie Canal.

From 1996 to 2000, Will Arnett struggled in the television field. He acted in pilots such as The Mike O’Malley Show, Loomis and many more. He was cast in movies ‘Close Up’ and ‘Ed’s Next Move’ in 1996. From then on he had another three movies: ‘The Broken Giant’, ‘Southey’ ‘The Waiting Game’. He also ventured into voice acting, but he did not get a lot of work. Due to his depression, he spiralled into alcoholism until his friend helped pull him out, and encouraged him to attend Alcoholic Anonymous. His agent persuaded him to audition for Arrested Development pilot for the last attempt.

In 2002, Will Arnett guest-starred in The Sopranos and Law & Order: Special Victims Unit, and had a spot in comedy show Saturday Night Live. He also did a series of other guest appearances. He was asked to audition for the part of George Oscar "Gob" Bluth II, a character in Arrested Development.

Will Arnett received an Emmy for the part in Arrested Development. Even though it only aired for three season and was canceled in 2006, the show gave Will a new opportunity. After the show, he starred in comic movies like Let's Go to Prison, Blades of Glory, and Semi-Pro. In 2011, he returned to series Up All Night and Arrested Development fourth season.

Will Arnett also appeared in 2014 and 2016 Teenage Mutant Ninja Turtles. Will also starred in The Millers, which lasted for two seasons. In 2016, he co-created, co-wrote and starred in Flaked, where he started drinking again. Will Arnett was the voice of Batman in the film The Lego Movie and The Lego Batman Movie.

Will Arnett married Penelope Ann Miller in 1994, for a year. After the divorce in 1995, he lived with actress Missy Yager for four years. He dated Amy Poehler in late 2000, and they tied the knot on August 29, 2003, but divorce was finalized in 2016. Together, they have two sons: Archibald and Abel.