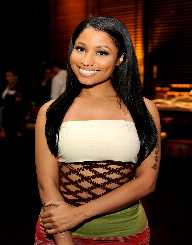 Nicki Minaj is a talented vocalist as well as a good songwriter that has established herself as not only an award-winning singer but a rapper. She is also a hip-hop artist, an icon of female empowerment as well as a television host. She has a unique voice which made her very popular and loved. She also has a very vigorous and fast flow rap style which got people’s attention with regards to her performance.

She is an excellent singer who is known not only for her bold and loud fashion statement but her colorful makeup. She has a very outrageous hairstyle which is often combined with unconventional costumes. Well, she was able to overcome many obstacles on her way to stardom. Despite the fact that she was born outside the US and had to live with an abusive and drug-addicted father, she still became a successful fellow.

Nicki Minaj is not her real name but a name that was adopted by the famous rapper who was christened Onika Tanya Maraj. She was born on the 8th day of December 1982 in Saint James, Trinidad, and Tobago. Her father was a financial executive while her mom was a foreign exchange teller and gospel singer.

Nicki Minaj migrated at a very young with her parents to the United States where she lived with her grandma. Her father is known to be an abusive fellow as well as a drug addict. It is the case that he once set the family home ablaze to kill her mother. She had an ear for music and auditioned for admission into her high school, La Guardia High School for the education in the arts of music. She worked in several odd works and often got fired due to her bad’ customer service.

Her music career started when she rapped in a foursome group, The Hoodstars. Nicki Minaj was determined to make it big in the music industry. She recorded the song Don’t Mess With with the Hoodstars. This song was meant for the WWE. It was thus named ThemeAddict: WWE The Music Vol 6. She left Hoodstar and uploaded most of her work on her Myspace profile page. She got the attention of Fendi who was then the CEO of Dirty Money Entertainment. It was then that she signed a 180-day contract, in 2007.

Nicki Minaj got connected to Lil Wayne through this, and both did series of collaboration mixtapes together. The first of its kind was Playtime Over. This was released in 2007 and portrays Minaj’s female swags and flashy style. As of 2010, she much discussed and covered debut album had many anticipations as regards to her performance. In April that same year, she released the song, Massive Attack which got her an Award as the Best Hip-Hop Female.

Nicki Minaj enjoyed a lot of recognition and support from far and sundry. In fact, her great performance was a reason for her guest appearance on some shows. She was invited to the American Idols competition as well as a judge. However, she got announced as the newest cast member of the competition late that year. It seemed Mariah, and she has a strained relationship as both argued with each other. In 2013, the duo had an argument during the auditions, Minaj stormed out of the stage. It was later gathered that Carey reported her to have claimed to harm her physically.

Nicki Minaj remains one of the rap and dance music’s rising stars despite the shade she had with Carey. It is the case that she performed at the 2012 Super Bowl appearance. She also performed with superstar Madonna. Later on, she released her album which reached the top of the Pop, R&B and rap charts. In the later part of that year, she released a newer version of her album, and this got the approval of her fans.

Nicki Minaj got engaged with Meek Mill, a hip-hop artist in 2015. She is yet to give birth, but speculations show that they might have an interest in having children in years to come. As at the writing of this article, Minaj is valued at $50 million.