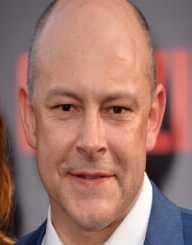 Rob Corddry was born on February 4, 1971, in Weymouth, Massachusetts, USA.

As a young adult, Rob Corddry attended the University of Massachusetts. While there, he started to become involved with theater. He later graduated from this school in the early 1990’s with a bachelor’s degree in English.

Before Rob Corddry was a comedy television actor, he was a Shakespearean stage actor. He was a member of the National Shakespeare Company for a short time. Around the same time, he was also performing in less “professional” comedy skits and performing in improv groups.

Rob Corddry started acting in television in 1995 when he appeared on the tv series Naked Babies. In 1998, he started to work in a sketch comedy show called the Upright Citizens Brigade. He took on various roles on this show for the rest of the decade. Also, in 1999, he appeared in a small role in his first movie, Catalina Trust.

Rob Corddry’s career kicked off in the 2000’s. In 2004, he had his first major role in a movie as Bobby Dukes in Blackballed: The Bobby Dukes Story. After this, he continued to take on large roles (and sometimes cameos) in movies and the occasional guest role in comedy shows. Some of the most popular movies he appeared on during this decade include Wedding Daze, Failure to Launch, Blades of Glory, The Heartbreak Kid, and What Happens in Vegas. He also has small roles in the shows MADtv, Curb Your Enthusiasm, and Arrested Development. He also had a recurring role on the show The Winner in 2007.

As of the 2010’s, Rob Corddry continues to act, mostly in comedy films and television shows. Most recently, he has worked on more television shows than movies. Some of the shows that he has had recurring roles on including Ben and Kate, Happy Endings, Community, Robot Chicken, American Dad!, Ballers, Drunk History, and Children’s Hospital, which is one of his most popular current roles. He has also recently had roles in the movies How to be a Latin Lover, Officer Christmas Party, Hot Tub Time Machine, Sex Tape, and Rapture-Palooza.

Outside of his career as an actor, Rob Corddry has also worked as a producer. He began producing in 2008, on the show Children’s Hospital. He continued to work on a producer on this show until 2016. He has also worked on the show Newsreaders from 2013-2014. He was also the executive producer of the film Hot Tub Time Machine 2 in 2015 and the made-for-television movies The Hindenburg Explodes! And Mr. Neighbors House, both in 2016.

Over the course of his long acting career, Rob Corddry has only won four acting awards and has only been nominated for seven others (as of 2018) his awards are listed below. All of his awards are for his job as a producer or actor on the show Children’s Hospital.

Rob Corddry married Sandra Lefkowitz in 2002. They also have two children together: Marlo and Sloane Corddry.