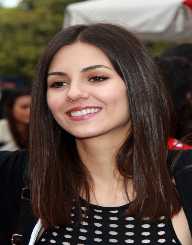 Victoria Dawn Justice was born on February 19th, in 1993. She is a celebrated American actress. Besides acting, she has also earned high acclaim through her singing talent. She began acting when she was aged 10. From this time henceforth, she featured in some TV shows and films. She has featured in the Nickelodeon series called Victorious and Zoey 101. Recently, in 2015, she played the lead role in Eye Candy, an MTV series.

Victoria Dawn Justice was born on February 19th, 1993. Her birthplace was in Hollywood in Florida. She is the daughter of Zack and Serene Justice. Her younger stepsister is called Madison Grace Reed. Both her parents are from different descents. On one side, her father is from the English, Irish and German descent. On the other hand, her mother is of Puerto Rican descent.

In 2003, Justice and her family moved to Hollywood, California. Two years later, she auditioned at the Millikan Performing Arts Academy where she was accepted to the theatre program. During the early stages of her career, she has featured in some ads for notable companies including Guess, Gap, and Ralph Lauren.

Justice’s acting career took off when she was aged 10. During this time, she made a guest appearance in the Gilmore Girls. Shortly after appearing on the TV show, her parents relocated to Los Angeles. Part of the reasons for her parents moving was to offer a helpful environment for their daughter to take on her acting career.

A year after relocating, Justice made guest appearances on The Suite Life of Zack & Cody. Here, she was playing the role of Rebecca, a pageant contestant. She later landed on a role in Mary, a 2005 film directed by Abel Ferrara. In this film, she played the role of Stella.

Things improved later that year as Justice landed on a lead role in the Nickelodeon series called Zoey 101. She played the role of Lola Martinez. She portrayed the character of a young student who aspires to become a famed actress. In 2006, she concurrently made guest appearances on Everwood TV series while at the same time shooting episodes for Zoey 101. Other films that she featured in during the same year include Unknown – 2006 and The Garden – 2006.

Victoria Dawn Justice loves watching movies rather than going out partying. She is a philanthropist and has taken a huge role in some charity events. She recently supported United Nations Foundation and other children’s hospitals.