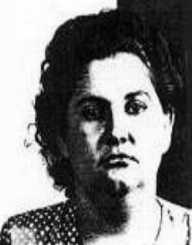 Martha Beck was a serial killer who together with her accomplice Raymond Fernandez became The Lonely Killers.

Martha Jule Seabrook was born to Stanley Seabrook and his wife on May 6, 1919, in Florida. She adopted the name Beck after her marriage years later. Her parents divorced in her childhood. Her father separated and eventually divorced her domineering mother. Beck was a bulky figure. From an early age, she had to contend with derogatory abuses due to body size. Her rapid physical maturity led to her involvement in sexual acts in her childhood. She started looking for solace in older men. Unfortunately, at the age of ten, Beck was sexually assaulted by his older brother. Her mother blamed her for the incident. The abuse and rejection from the family and her peers left her depressed.

After graduating from nursing school in 1942, Beck was hired by a local funeral home. She spent some months preparing bodies for burials. Depressed by the funeral home job, she relocated to California. Beck found a job as a nurse at a local military hospital. To drown her low self-esteem, she began engaging in sexual activities with unfamiliar army acquaintances. She became pregnant by a soldier who denied paternal responsibility and supposedly committed suicide. Dejected, Beck returned back to Pensacola and got married to a military officer. He died in the line of duty during WW2.

Now a widow, she gave birth to a daughter at the Pensacola Hospital. The hospital later hired her as a nurse in 1944. In May that year, she was sacked for her unethical sexual activities. In the month of December, she married her second husband Alfred Beck. In June 1945 the couple divorced. She had adopted her husband’s last name and was expecting her second born. In February 1946, Beck got another job at a children’s home. Her professional acumen made her rise to the post of director at the institution. But her emotional needs had not been pacified. Unable to maintain a lasting relationship, she turned to liquor and romantic fantasies in novels.

In November 1946, Raymond Fernandez saw an advertisement on a lonely hearts platform. He responded to Beck and the two became close. They briefly met in December 1946. They exchanged romantic letters for one year. When she lost her job, Beck moved to New York with her two children. Fernandez took her in but rejected the children. Beck took her children to a church-run children’s home. In an effort to break up with her, he revealed that he was a swindler who conned unsuspecting rich women of their wealth. He went ahead to disclose his marital responsibilities to his family in Spain. Beck stayed put with him.

Beck decided to play as an accomplice in his criminal activities. The two swindled rich women looking for romance from Fernandez. Beck posed as his relative. Their first victim was Esther Henne. They swindled her of her house and some cash. Henne escaped before she could be killed.

In August 1948, Fernandez ‘married’ Myrtle Young. They moved to Chicago for their honeymoon. Fernandez’ sister in law Beck, traveled with them. Young complained about her presence. She was poisoned and later died in hospital. The two left with USD 4,000.

In January 1949 Fernandez introduced Beck as his sister to Janet Fay. When another quarrel erupted between the two ladies, Beck struck Fay on the head with a hammer killing her instantly. They buried her in a rented house in Queens New York. They escaped with over USD 6,000 in cash.

Fernandez got another invitation for love from Delphine Downing. The Michigan widow had a young two-year-old girl. When they moved to Michigan, Beck became Fernandez sister in law. Beck became jealous of the sexual activities between Fernandez and Downing. Beck dosed her with sleeping pills and while asleep Fernandez fatally shot her in the head. Beck drowned the young girl in a basin of water. The two bodies were buried in the house.

Some neighbors got suspicious and called the police. The officers came in, interrogated them, and searched the house. They found two bodies buried in the house. Fernandez and Beck were arrested and tried. Since Michigan had no death penalty in its laws, the prosecution took the case to New York. The two were convicted of first-degree murders and sentenced to death by the electric chair.

Like in other high profile criminal intrigues, the two had their lives turned into film production, The Honeymoon Killers.