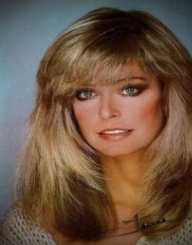 Farrah Fawcett, the American actress, has acted in many TV shows and movies. She became famous in 1976 for her portrayal of Jill Monroe in the TV series Charlie’s Angels. A poster with a red bathing suit made her a superstar and the poster sold more than twelve million. Her feathered hairstyle made her popular with all the women, and many copied her hairstyle. Her acting abilities earned her three Emmy nominations.

Ferrah Leni Fawcett was born in Corpus Christi a coastal city in Texas on February 2, 1947. Her father Jim Fawcett was an oilfield contractor, while her mother Pauline was a housewife. She was the second daughter to her parents and she altered her name to Farrah after sometime.

Farrah Fawcett studied in John J. Pershing School in Houston which is famous for fine arts. She also made her mark as the “Most Beautiful Student” in W. B. Ray High School from 1962-65.

She also enrolled for a course in microbiology in the year 1965 in the University of Texas, Austin. She was a member of Delta Delta Delta sorority. However, her dreams of higher education were short lived.

Making of a star

In 1966, Farrah Fawcett was persuaded by a famous publicist to become a model. She was able to convince her parents after their initial resistance and she left with her parents to Hollywood to make her career as a model. She was fortunate to get plenty of modelling assignments for advertisements and TV commercials on her arrival within two weeks in 1968.

While in Hollywood, Farrah Fawcett got into a relationship with Lee Majors, an actor. They married on July 28, 1973, after dating for five years. Majors started and acted in his TV series, The Six Million Dollar Man which became an instant success. Fawcett was seen as a guest artist in many of the shows. The marriage of Fawcett and Majors came to an end in 1979 after 9 years. She started a relationship with actor Ryan O’Neal and in 1985; their union resulted in the birth of Redmond in 1985.

In 1997, Farrah Fawcett and O’Neal separated. She started a turbulent relationship with Hollywood director James Orr. She appeared in The Late Show by David Letterman on June 5, 1997. She was unintelligible in the show and this led to rumours about her addiction to drugs. When Fawcett refused to marry Orr, he became violent and attacked her in January, 1998. Orr had to pay for this misbehaviour and was sent to prison. Meanwhile, she resumed her relationship with O’Neal which continued intermittently.

In this period, an advertisement of Farrah Fawcett in a red bathing suit became an instant hit because of its naive and sexy look, and sold more than twelve million copies. With this single poster, she became a superstar overnight. The awesome hairstyle caught the fancy of American women and became a fashion statement. This led to the introduction of Farrah Fawcett shampoo.

In spite of the overpowering reputation, Fawcett refused to star in the second term of the Charlie’s Angels show. The powerful producer spelling sued Fawcett for $7 million for infringing the terms of the contract. However, the matter was closed amicably after Fawcett agreed to appear as a guest artist frequently.

In 1976, Farrah Fawcett tried her hand in films by acting in Logan’s Run. Though she appeared in 1979 in Sunburn, and Saturn 3 in 1980, the films were not successful. The film industry was not sure of her acting prowess and hence she was unable to land good roles. Fawcett was acclaimed for her performance in the television series Murder in Texas in 1981. She acted in the film Cannonball Run in the same year.

Fawcett turned a producer and the TV movie The Burning Bed was created in 1984. The film dealt with marital hostility and physical violence. Her scorching performance brought her overwhelming appreciation and the film was nominated for Emmy awards. She acted in Extremities in 1986, Small Sacrifices in 1989, and The Guardian in 2001. She earned her third nomination for her performance in the last film.

Fawcett concentrated on innumerable TV movies during the 1980s and 1990s. She acted in Nazi Hunter: The Beate Karsfeld Story in 1986, Poor Little Rich Girl: The Barbara Hutton Story in 1987, Double Exposure: The Story of Margaret Bourge-White in 1989, Criminal Behavior in 1992 and The Substitute Wife in 1994.

Farrah Fawcett acted along with Richard Gere and Helen Hunt in the comedy film, Dr. T and the Women produced by Robert Altman in 2000.

Initially, Fawcett was against nudity in movies and publications. The rule was broken by her in December 1995, when her topless picture was published in Playboy magazine. 4 million copies of the magazine were sold internationally and Fawcett’s popularity skyrocketed. After two years, her picture appeared again in Playboy. Fawcett played a lead role against Robert Duvall in the famous religious drama The Apostle in that year.

On her 60th birthday on February 2, 2007, she was cleared of cancer. An after-party brawl between Ryan O’Neal and son Griffin spoiled the good occasion.

A diagnosis of a small tumour on the body of Farrah Fawcett in May, 2007 turned out to be cancerous. She went to Germany and was treated with chemotherapy in Frankfurt and unconventional treatments in Bad Wiessee in Bavaria.