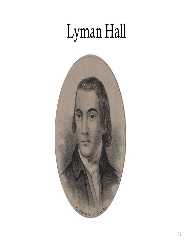 Lyman Hall was an American physician and statesman who is best known as a signatory of the United States of America’s declaration of independence.

Lyman Hall was born in Connecticut on 12 April 1724. He was one eight children that John and Mary Hall had together. Hall’s grandfather, Samuel Street was a church pastor, and Hall also served as a pastor following his grandfather’s tutelage. He was, however, dismissed as a pastor due to charges against his moral character. Hall studied at Yale College and graduated in 1747. Hall worked as a preacher and physician and moved first to South Carolina and then on to Georgia. Hall became a leading member of the community in the town of Sunbury. As the town’s physician, he was kept busy by many outbreaks of disease during the town’s early existence.

As political dissent grew in the American colonies a Continental Congress was called, Georgia did not send any delegates to this first Congress. Lyman Hall argued that Georgia should take part when a second Congress was announced in 1775. Due to his prominence amongst the community Hall was chosen as the town’s delegate for the Second Continental Congress in Philadelphia in 1775. Georgia was a predominantly loyal state, although Sunbury was considered a radical community within the state. A provincial congress was set up in, and three Georgian delegates were selected to be sent to Congress. The Continental Congress held now real authority it could not levy taxes or raise an army and instead it was dependent on the individual states. Not all delegates enjoyed the authority to vote on certain proposals. By 1776 it became obvious that a clash with the British crown was inevitable and the Congress needed to find foreign allies and to raise a standing force. To obtain these things a declaration of independence was required.

Lyman Hall became one of three Georgian signatories and one of the fifty-six total signatories of the United States Declaration of Independence. During the Revolutionary War the British burned the town of Sunbury and Hall was forced to flee north. He only returned to Georgia at the end of the Revolutionary War. He was made the first governor of Georgia in 1783. After a one year term, he returned to the state assembly.

Lyman Hall married Abigail Burr in 1752, but the marriage was short-lived as Burr died within a year. He remarried in 1757 and had a son, John, with his second wife, Mary Osborne. Lyman Hall died on 19 October 1790 at a plantation in northern Georgia. Hall was survived by his wife and son but would have no more decedents. Hall is honored in Georgia with the Signers Monument, dedicated to the Georgian signatories of the declaration of independence, and Hall County, named in his honor. His hometown of Wallingford named the town’s high school after Hall.