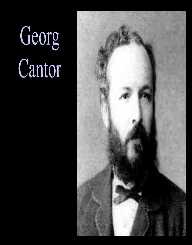 Georg Ferdinand Ludwig Philipp Cantor was born on March 3, 1845, in Saint Petersburg, Russia. He was the oldest of six children in the family. His grandfather was a violinist and a well-known musician, and Cantor himself was known as an outstanding violinist. In 1856, the family moved to Wiesbaden, Germany and later to Frankfurt due to his father’s poor health.

In Germany, Georg Cantor finished the Realschule in Darmstadt, where he was noted for his excellent mathematics and trigonometric skills. In 1862, he enrolled in the Swiss Federal Polytechnic. When his father died in 1863, Cantor transferred to University of Berlin. In the summer of 1866, he went to study at the University of Gottingen, where he studied mathematics.

In 1874, Georg Cantor met and later married Vally Guttmann. The couple had six children together. Although his salary as a professor was small, he was able to support the big family thanks to the inheritance from his father.

In 1872, Cantor became the Extraordinary Professor, and in 1879, he became full Professor. At the time, he was only 34 years old. Despite his success, Cantor wanted to be a professor at a more prestigious university, in particular in the University of Berlin. However, his work at the time was mainly opposed, and he was never able to work there. The head of the mathematics department in Berlin, Kronecker was a fundamental opponent of Cantor’s work and could not see him as a colleague.

In 1881, a post at Halle was vacant, and Georg Cantor offered the job to several prominent mathematicians, one of which was Richard Dedekind. He denied the post, which led to the end of his and Cantor’s correspondence. During early 1880, Cantor published his work in Acta Mathematica. However, his work was not widely accepted, and this led to Cantor switching from lecturing philosophy rather than mathematics. He also began to study Elizabethan literature.

During the late 1880s, Cantor’s health declined. He spent some time in sanatoriums. When Cantor’s son suddenly died, he lost his passion for mathematics. In 1904, Julius Konig published a paper at the Third International Congress of Mathematicians, which attempted to prove that the basic tenets of Cantor’s transfinite set theory were false. Despite the fact that Konig’s proof failed, Georg Cantor felt humiliated, and it led to a series of hospitalizations due to his depression. He continued to lecture at the university and attended several international congresses.

In 1911, Georg Cantor attended the 500th-anniversary celebration of University of St. Andrews in Scotland. The following year, he was made the honorary doctorate of the university. Cantor retired in 1913 and continued to live the rest of his life in poverty. During World War I, he was suffering from malnourishment. Georg Cantor died on January 6, 1918.