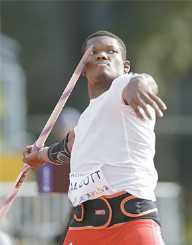 As a javelin thrower, you need to hold the spear designed sporting tool in a balanced and simple manner. In other words, it must be faintly held above your ear level. Wait, I am neither a javelin coach nor an avid athlete. I am just trying to figure out what Keshorn Walcott loves to do and how he does it best. He is rightly known as an Olympian, gold medal winner in 2012 and a javelin thrower. His older sibling, Elton showed resounding results as an athlete, and it was here that he inspired his brother, Walcott to fathom further.

Keshorn Walcott got a seat in sports at fifteen years of age, and his talent was noticeable even to the unknown. At 16, he garnered his first rank where he won his first world junior record. He followed it up with more than two gold medals. His tremendous performance turned him into a national hero in his native land, Trinidad. Read along to understand more about his line of work.

Keshorn Walcott is an enthusiast in everything he attempts to do. He is more inclined to carry his own opinions without limits just to make sure he has attained his ultimate goal. He seems to have lots of opportunities, but he only likes to choose the best of the best. Above all, he has to take a profound decision at the right time if he wants to fathom further.

Walcott prefers an activity that challenges his talent. This shows that his character trait is underlined by his creativity and determined nature. In everything he does, he should allow his brainy mind to shine. In a social way, the outcome gives him a warm and enjoyable sense of humor. While still at it, if he combines this with new ambition, he turns out to be an unstoppable javelin thrower. Before anything else, he sincerely desires to set higher goals hence embracing a good personality both at work and social life.

On April 2, 1993, Keshorn Walcott was first seen in the world in Toco, Trinidad. He comes as the youngest sibling of three elder brothers. Toco was a decent village and Walcott didn’t get the urban’s life. He came to choose Javelin as his favorite sports at 15 years old. At 16 years old, he was named as the Caribbean Youth javelin holder.

Early in 2010, Keshorn Walcott showcased his athletic skills when he threw an 800-gram javelin. For three years he received the U-20 Caribbean Junior Javelin at Caribbean Free Trade Association Games CARIFTA. His tremendous performance gave him a chance to set higher records for the Central American and Caribbean junior record NACAC. It was here that he made a record of 80 meters throw in 2012 CARIFTA juniors.

In 2012 Keshorn saw himself as an underdog when he found himself on the same field with one-time javelin gurus in London. To make matters better, the windy climate favored him while he was showcasing his javelin throwing skills. In the middle of all, he went home with an Olympic gold medal when he made a new set of 84.58 meters. When he went back to his native land, he was treated like a royal blood to the point of being given his own property. A luxurious home followed as his personal gift in Spain. He also received more than $150,000 cash reward.

In 2013 Keshorn Walcott’s talent was postponed by an injury for several seasons. Nonetheless, he managed to excel without complaints. The following years, he rose again where he planned to win the 2014s Commonwealth tournaments. It was here that he opted to spend more time on his training where he went in Cuba. He received intense training with the help of his dearest coach, Lopez Mastrap. During the 2014 Commonwealth games, he completed in second place when he finished with 85.28 records. His current set is 85.78 meters he ended in 2014s IAAF Diamond League.

It was in the mid of 2012 that Keshorn Walcott received a gold medal for setting a new record of 84.58 meters. When he went home to a 2012 Olympic Gold Medal, the Toco lighthouse and a prestigious secondary school in Toco took an honor of his name. He is the first African-American as well as the youngest competitor to win a gold medal in Olympics throwing event.