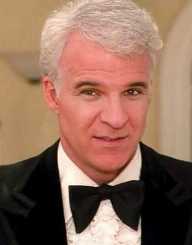 Steve Martin began his career as a stand-up comedian performing regular gigs in clubs. His first appearance on television came when he appeared on 'The Steve Allen Show' followed by 'The Virginia Graham Show.' He managed to carve a niche for himself as a playwright, author, pianist and banjo player. Martin was ranked sixth in a list of 100 stand-up comedians in 2004. Although he has been playing music from an early age, as of 2000s Martin has dedicated his time to music and less on acting.

Steve Martin, the son of Mary Lee and Glen Martin (an aspiring actor and real estate salesman), was born on August 14, 1945. He was raised in Inglewood, California then moved to Garden Grove California. He grew up in a Baptist family and was a cheerleader in Garden Grove High School. Growing up in his teen years, his memories of his father is that of a person who was not emotionally open, yet stern but he was proud of Martin.

Martin got his first job in Disneyland selling guidebooks and this gig lasted for three years (1955-1958). He would do this job on weekends and full time during school holidays. He also frequented the Main Street Magic Shop and mastered the art over time.

After completing high school, Steve Martin enrolled at the Santa Ana Junior College and took drama classes and English poetry. He then attended the State College in Long Beach, California, and he studied Philosophy. He moved to UCLA changing his major to theatre. But this was not to last long as he dropped out of college and focused on his career as a performer.

In 1967, Steve Martin found a job as a writer in the show 'The Smothers Brothers Comedy Hour'. Afterwards he started appearing on television with some of his first appearances being 'The Allen Show' and The Virginia Graham Show.'

In the mid-1970s he became a frequent appearance on 'The Tonight Show,' The Gong Show' and 'Saturday Night Live' increasing his viewership. In the 1970s He released two albums 'Let’s Get Small' and 'A Wild and Crazy Guy' which were both a great hit peaking at number 2 on the U.S sales charts. They sold over a million copies enabling Martin to achieve considerable fame as a stand-up comedian.

In 1978, Martin ventured into films. He appeared in small films getting roles in musicals.1979 saw Martin co-writing a comedy film 'The Jerk' with Carl Gottlieb and Michael Elias. The film was a success, earned over $100 million.

In 1991, Steve played a more serious role than he is used to by featuring in the film 'Grand Canyon'. Steve Martin eventually managed to take on a darker role in 'The Spanish Prisoner', playing the role of Jimmy, a suspicious character developing an interest in a young businessman. This film was nominated for the Edgar Award for Best Motion Picture Screenplay by the Mystery Writers of America.

In 2003, Steve Martin co-starred alongside Queen Latifah in 'Bringing down the House.' This film earned $132.6 Billion in the United States. The same year saw Steve appear in 'Cheaper By The Dozen' which was a big hit. He continued with being comedic by appearing as Inspector Clouseau in 'The Pink Panther'(2006) which was a big hit spawning a sequel 'The Pink Panther 2'.

Along being an award-winning actor, Martin loves writing and has published novellas such as 'Shopgirl'(2000), 'The Pleasure of My Company' (2003), and his Memoir 'Born Standing Up” (2007).

Steve Martin has been nominated 24 times for awards and has won 21 awards. He has awards such as the Life Achievement Award in Comedy, Outstanding Music for 'Bright Star', Best Comedy Album for 'A Wild Crazy Guy'(1979), Best Bluegrass Album for 'The Crow: New Song for the 5-String Banjo; (2009) and the Outstanding Writing for a Variety Series for 'The Smothers Brothers Comedy Hour' (1969). Of Course, this is not the full list of awards but his peak in the career of Steve Martin.

Other awards and honors include Honorary Doctor of Humane Letters Degree from California State University Long Beach in 1989, Mark Twain Prize for American Humor in 2005, Disney Legend award in 2005, 30th Annual Kennedy Center Honors in 2007, the International Bluegrass Music Association's Entertainer of the Year in 2011, The Academy Honorary Award in 2013 and the AFI Life Achievement Award in 2015.

Steve Martin married actress Victoria Tennant on 20th November 1986. They divorced in 1994. In 2007, Steve married Anne Stringfield, a former staffer for the New Yorker and a writer. They have been together for ten years.  In 2012 Steve Martin's wife gave birth to their daughter making Martin a dad at the age of 67.

In 2016, Steve Martin bowed to pressure and deleted a tweet where he called Carried Fisher a 'beautiful creature'. In 2013, Steve Martin had to apologize after being misquoted by the media as being racist when he was asked to spell the word Lasagna and he clarified to the reporters that it depends where they are from. Steve said that it depends on if a person was in an African American neighborhood or an Italian Restaurant because he knew of the name Lasonia.