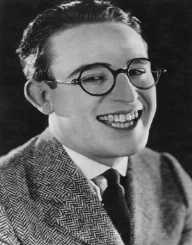 Harold Clayton Lloyd Sr. was an American actor, comedian, and filmmaker. Born on April 20, 1893, he is ranked alongside others like Buster Keaton and Charlie Chaplin as one of the famous film comedians during the silent film era. Throughout his career that spanned from 1914 to 1947, he featured in almost 200 comedy films including silent and talkies and becoming the highest paid actor in the 1920s.

His most successful films include Safety Last!, 1923, in which he hanged on the hands of a clock above the street, Girl Shy, 1924 and The Freshman in 1925. Lloyd became known for his daredevil act in most of his films.

Harold Lloyd was born on April 20, 1893, in Burchard, Nebraska to J. Darcie Lloyd and Elizabeth Fraser. He received education in Denver and San Diego high school and later enrolled at the School of Dramatic Art, San Diego where he received stage training.

Harold Lloyd started his acting career by playing a minor role in The Old Monk’s Tale as a Yaqui Indian in 1913. He moved to Los Angeles at the age of 20 where he featured in several keystone comedies. While there, Universal Studios hired him as an extra and later became a friend of filmmaker Hal Roach.

Roach formed his studio and began collaborating with Lloyd, resulting in films like the Lonesome Luke series. As he started to receive several roles, he hired Bebe Daniels in 1914 as a supporting actress, with the two becoming known as "The Boy" and "The Girl."He came into the limelight with his role in Just Nuts in 1915. After working together for five years, Bebe left to pursue a dramatic career, and Lloyd hired Mildred Davis who later became his wife.

With consistent performances in films, Harold Lloyd transformed from his role as Luke to the white-faced man in round glasses with ordinary cloth, which became his trademark from 1918. He had previously worn tattered clothing with a fake mustache.

Harold Lloyd was severely injured by a prop bomb while taking some still promotional photos in the Los Angeles Witzel Photography Studio losing his thumb and forefinger in the process. He mistook the prop bomb for a little smoke pot, hence, the explosion, which also injured the cameraman and prop director.

His silent films include Grandma’s Boy, 1921, Safety Last!, 1923, Why Worry?, 1923, Shy Girls and The Freshman, which was his highest grossing silent film. Others include The Kid Brother and his last silent film Spider. He retired from acting in 1947.

Harold Lloyd formed the Harold Lloyd Film Corporation an independent film production company in 1924. In 1929, he released Welcome Danger to great commercial success. Other works include Feet First, The Milky Way and The Sin of Harold Diddlebock.

In 1944, Harold Lloyd ventured into radio by hosting The Old Gold Comedy Theatre on NBC radio. The show featured a half-hour adaptation of successful comedy film, starting with Palm Beach Story. It also featured some prominent radio and film personalities including Linda Darnell, Fred Allen, Susan Hayward, Lucille Ball, and Herbert Marshall. It ended in June 1947, with his last movie being Mad Wednesday.

On February 10, 1923, Harold Lloyd married Mildred Davis in Los Angeles, California. The couple had two children, Gloria and Harold Clayton Lloyd Jr. They later adopted another daughter Gloria Freeman renaming her Marjorie Elizabeth Lloyd. Davis died in 1969 of a heart attack. Lloyd followed his wife two years later when Harold Lloyd died from prostate cancer in 1971 at age 77. He was buried in a crypt in the Great Mausoleum at the Forest Lawn Memorial Park Cemetery in Glendale, California.