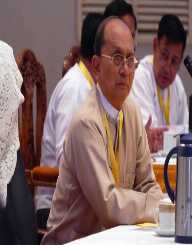 Thein Sein was born on April 20, 1945, in Kyonku, Myanmar (formerly British Burma). His mother is Khin Nyunt, and his father is Maung Phyo. He also has two siblings.

The Sien family was a poor one. Sien’s parents were farmers who did not make much money, just enough to support the family. Because of this, Thein Sein had a modest education but did this did not deter him from having high career goals for himself. Being poor taught him how to work hard for what he wanted, which was a lesson he would never forget.

For both his education in military training and for his bachelor’s degree (in Arts), Thein Sein attended the Defence Services Academy. After graduating from the academy in 1968, he became a second lieutenant in the Myanmar army.

Throughout the next couple of decades, Thein Sein was an important member of his country’s army. He moved up the ranks steadily, eventually becoming the commander of the 89th Infantry Battalion in 1988. In 1989, he had more training at the Command and General Staff College. Once he was done with his training, he was able to command more army units. Also, he was promoted several times throughout the early 1990’s. Some of the positions he held were as a Gender Staff Officer, Brigadier General, and a General Staff Officer.  He was lastly promoted to be the leader of the Triangle Regional Military Command in 1997. He worked in this position until 2001.

In the beginning of the 21st century, he worked for both the military and the government. Thein Sein worked at the War Office and on the State Peace and Development Council (SPDC). He was promoted to the second secretary of the SPDC in 2003.  The next year, he was promoted again to the first secretary.

When the Prime Minister of Myanmar became too ill to lead, Thein Sein became the Interim Prime Minister in 2007. Around the same time, he was also promoted within the military to Lieutenant General. He did not officially retire from the military until 2010.

After retiring, he led the Union Solidarity and Development Party. The party becomes popular very quickly. With the power his new party held, he felt confident to run for president of Myanmar. He won the election with a landslide vote.  He was officially sworn in as president of Myanmar in early 2011.  Also in this year, the country has officially renamed the Republic of the Union of Myanmar (It was formerly known as the Union of Burma/Myanmar).

During his time as president, Thein Sein led multiple reforms. His goals have mainly been to make Myanmar a more peaceful country. Many prisoners were released from prison as well (mostly political prisoners). His measures were successful, and his countrymen and leaders from Asia found him to be a wonderful president. He only stopped being president at the end of his term in 2016. He was succeeded by Htin Kyaw of the National League for Democracy party.

Thein Sein is married to Khin Khin Win. Together, the couple has three daughters.