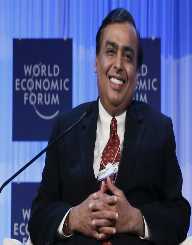 Mukesh Ambani is a Yemeni born Indian businessman who is best known for being the wealthiest person in India.

Mukesh Ambani was born in the British colony of Aden (present-day Yemen) on 19 April 1957. Ambani moved to Mumbai in 1958 with his parents, Dhirubhai Ambani and Kokilaben Ambani. The family lived together in a modest apartment in Mumbai, Ambani’s two sisters, DiptiSalgaoncar and Nina Kothari, and his brother, Anil Ambani, also lived in the two-room apartment. Ambani’s father set up a spice business upon his return to India and later expanded into textiles. Ambani attended high school in Mumbai’s Hill Grange High School. Following his graduation, he studied chemical engineering at the Institute of Chemical Technology. Ambani studied for a master’s degree at Stanford University but would return before graduating to join his father’s business.

Mukesh Ambani began working with his father at Reliance Industries in 1981. Ambani played a role in the setting up of a polyester filament yarn production factory. Ambani refocused the company turning from textiles to polyester and petrochemicals. Ambani led the rapid expansion of Reliance Industries as more and more factories were set up and production increased greatly. Ambani set up Reliance Infocomm Limited; this company focussed on communication technologies and today is a major broadband and telecommunications provider. It is one of the major providers of 4G broadband in India. Ambani built one of the largest petroleum refineries in the world in 2008. The refinery could produce six hundred and sixty thousand barrels of oil per day.

Ambani is the Chairman, Managing Director and Chairman of the Finance Committee of Reliance Industries Limited, which is India’s second-biggest company regarding market value. Ambani has also worked on the board of directors of Bank of America. Ambani has also served as chairman of the board at one of India’s top business schools, Indian Institute of Management Bangalore.

Ambani married Nita Dalal in 1985. Nita also serves on the board of Reliance Industries and is co-owner of the Mumbai Indians with Ambani. Together they have three children, Anant, Akash, and Isha. Ambani has an estimated value of 19 billion dollars making him India’s richest person and in 2014 was named the 36th most powerful person in the world by Forbes Magazine. He and his family live in ‘Antilia’ the world’s most expensive private residence. It is valued at one billion dollars and has twenty-seven stories. Six hundred staff work in the building. Antilia is in Ambani’s hometown of Mumbai.