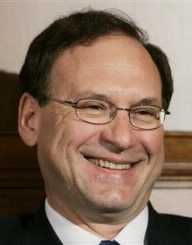 Samuel Alito was born 1st April 1950, to Samuel A. Alito Sr. and Rose Alito. He was born in Trenton, New Jersey, in the United States. Samuel Alito's father migrated to the U.S. from Italy. He was a high school teacher, but then became the first Director of the New Jersey Office of Legislative Services. He held the state government position from 1952 to 1984.

Samuel Alito studied at Steinert High School in Hamilton Township in New Jersey. He then studied at Princeton University, and then Yale Law School. Whilst at Yale, he held the position of editor of the Yale Law Journal. He graduated in 1975.

Samuel Alito was involved on campus at Princeton. In 1971 he chaired the student conference called The Boundaries of Privacy in American Society. It addressed several important issues including gathering of domestic intelligence and an end to discrimination against gays by prospective employers.

Samuel Alito also led the American Whig-Cliosophic Society’s Debate Panel whilst he was at Princeton.

In the U.S., there is an independent government department called the Selective Service. All males over the age of 18 are required to register in case conscription needs to be implemented. In 1969, Samuel Alito drew a low number in the lottery, and in 1970, he joined the Army Reserve Officers’ Training Program. He did six weeks basic-training at Fort Knox in Kentucky.

During his final year at Princeton, Samuel Alito studied in Italy, where he wrote his thesis which was based on the Italian legal system.

After graduation in 1972, Samuel Alito was commissioned as a Second Lieutenant in the U.S. Army Signal Corps. Upon completion of his graduation from Yale Law School in 1975, Samuel Alito served on active duty between September and December of that year. He remained in the army, but he served in the Reserves. He received an honorable discharge in 1980, having attained the rank of Captain.

Samuel Alito's first role was a clerking position for Judge Leonard I. Garth, a Third Circuit Appeals judge, which he held for 1976-77.

In 1977, Samuel Alito was Assistant United States Attorney in the District of New Jersey. He served under U.S. Attorney Maryanne Trump Barry. He held the position until 1981, and during his tenure prosecuted many cases in relation to drug trafficking and organized crime.

In 1981, Samuel Alito became Assistant to U.S. Solicitor General, Rex E. Lee. Alito was in the role until 1985, and during that time he argued 12 cases on behalf of the federal government before the Supreme Court. He only lost two of the cases.

Over the next two years, Samuel Alito continued his legal work, but also during that time wrote almost 470 pages of legal memorandums. It was evident that he came from a conservative viewpoint.

In 1987, Samuel Alito became the U.S. Attorney for the District of New Jersey, a position he held until 1990.

Judge Leonard I. Garth and Judge Maryanne Trump Barry, both of whom Samuel Alito had served under, nominated him to President George H. W. Bush to become a Third Circuit judge. He was confirmed to the position in April 1990. His chambers were in New Jersey.

Another nomination was made for the Associate Justice position, but she withdrew because there was a lot of opposition. Alito was then nominated for the position, and he was unanimously voted as well qualified.

Samuel Alito's confirmation hearing took place in January 2006, over four days. He answered roughly 700 questions. His nomination was voted out 10-8 because the Democratic Senators saw him as a hard-right conservative. The American Civil Liberties Union also opposed his nomination.

His first written opinion was delivered in May 2006, and there were several others that followed during his first term. Samuel Alito is seen as one of the most conservative justices on the Court, but holds a fair view, and doesn’t always vote conservative.

He participated in a landmark free speech case in 2007. It was in relation to a decision for speech agreeing with drug use being able to be banned in public schools. Alito did, though, warn that the majority ruling should not interfere with political speech.

Samuel Alito has had majority opinions in several landmark cases, so continues to make a difference with the position that he holds.

Samuel Alito married Martha-Ann Bomgardner in 1985. She was a law librarian, and Alito had met her on his trips to the library when he was a law clerk. The couple has two children, a son, Philip, and a daughter, Laura.