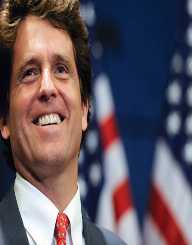 Mark Raymond Kennedy was born on April 11, 1957, in Benson, Minnesota, United States. He is an American Businessman and a Republican Party politician. Presently, he is working as the 12th President of the University Of North Dakota having assumed office on July 1, 2016.

Mark Kennedy grew up in the tiny towns of Murdock and Pequot Lakes having graduated from Pequot Lakes High School in 1975. He became the first boy in his family to receive education from a college when he got enrolled at St. John’s University. In 1979, he graduated from the University and pursued a career as a Certified Public Accountant. He received his M.B.A. from the University of Michigan's Ross School of Business in 1983.

Pillsbury Company, the largest producer of grain and foodstuffs in the world, hired Mark Kennedy in 1983. He played a vital role in purchasing the Häagen-Dazs and also arranged the fund required for the international expansion of the company. He left the company in 1987 and joined the Federated Department Stores as their Senior Executive. His tenure with this company saw its transformation as Macy’s, the leading department store and largest fashion goods retailer in the world. He was credited as a key man who steered the company towards success. The Institutional Investor Magazine, in its May 1992 issue featured him on its cover as one of America’s top CFOs. He was entrusted with the job of marketing, store management and merchandising at ShopKo Stores.

In 2000, Mark Kennedy went on to win the Republican nomination for the second district of Minnesota and encountered his rival four-term Democrat David Minge. Though he was running for a political office for the first time, he succeeded in defeating the Democrat by a wafer-thin margin of 155 votes only. In 2002, he fought against Janet Robert, a long-time Democrat and a lawyer. Kennedy was successful in his reelection after receiving 57% of the votes polled. It was the most expensive congressional race in Minnesota’s history. He cast the deciding vote in favor of empowering the President to apply his authority in speeding up negotiation of international agreements without any hassles of amendment or filibuster by the Congress in 2002.

Mark Kennedy also facilitated the enactment of a federal law titled ‘The Medicare Prescription Drug Plan’ by voting in favor of it in 2003. The law was instrumental in producing the largest revamp of Medicare in the public health program’s 38-year history. In Partial Birth Abortion Ban Act, where a physician will be prosecuted for willfully killing a human fetus, his vote was in favor of the Act. Similarly, he voted in favor of Unborn Victims of Violence Act of 2004, where an unborn child residing in her mother's uterus, is considered a legal victim of any of the listed crimes of violence deemed to have committed against them. Kennedy believes that he is a 100% pro-life person.

In 2004, Mark Kennedy was pitted against the Republican Nominee Patty Wetterling, a child safety advocate in the congressional election. Incidentally, in a horrific and tragic turn of events, Wetterling’s son was abducted and was never found. Kennedy won the election for the third time securing 54% of the popular votes. In 2006, Kennedy decided against seeking any further term in the United States House of Representative and instead run for the U.S. Senate seat being vacated by DFL Senator Mark Dayton. He ran against DFL candidate Hennepin County Attorney Amy Klobuchar. Kennedy lost the election having received 38% vote against Klobuchar’s 58%.

During his tenure as U.S. House of Representative from January 3, 2001, to January 3, 2007, Mark Kennedy supported and voted in favor of many reformist measures. He openly supported the War in Iraq during the 2006 U.S. Senate race. He supported the Bush tax cuts and also voted in favor of Deficit Reduction Act of 2005. The Act was successful in saving almost $40 million from mandatory spending programs over a five year period by applying various innovative measures. He sponsored the lifetime ban on all members of Congress becoming lobbyists, Medicare Plan Enrollment Fraud Protection, no parole for sex offenders and full deductibility of medical expenses. All these activities gave a significant boost to his reformist image.

Allying with former Congressman Tim Penny and Bill Frenzel, Mark Kennedy cofounded the Economic Club of Minnesota (ECOM) in 2008. It was a non-political forum for national and international leaders in business, government and public policy to present their suggestions about the ways and means to make Minnesota a global player. Kennedy was appointed to the President’s Advisory Committee on Trade Policy and Negotiation (ACTPN) in 2007.

At St. John’s University, his Alma Mater, Mark Kennedy established a lecture series titled Frontiers of Freedom at the Eugene J. McCarthy Center for Public Policy in 2008. The Chartwell Strategic Advisors LLC was his brainchild to advise people about the strategy to be adopted for the development of their business interest and to bridge the gap between business and society. Before that, he served as the Global Retail Business Development Lead for Accenture from 2007 to 2010.

From 2011-2013, Mark Kennedy taught MBA courses at Johns Hopkins University’s Carey Business School in Baltimore, Maryland. In 2012, Kennedy became the Director and Professor of George Washington University Graduate School of Political Management. He also serves as an auxiliary faculty member at Istanbul’s Koc University. On March 15, 2016, Kennedy was appointed as the twelfth President of the University of North Dakota.

Mark Kennedy is married to Debbie Miller, and they are blessed with four children. They currently reside in Grand Forks, North Dakota but mostly remain busy plying between Washington D.C. and Minnesota.