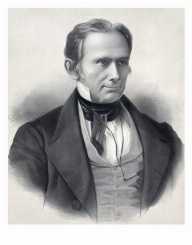 Henry Clay (1777-1852) was a famous American politician, member of the United States Senate for four non-consecutive terms. He was known for his charm and public speaking skills and was very influential on the politicians that lead the country during the Civil War.

Henry Clay, Sr. was born on April 12, 1777, in Hanover, Virginia to a large family of English descent. He was the seventh of the nine children of Reverend John Clay and his wife, Elizabeth Clay. Reverend Clay was a Baptist minister who owned a plantation complete with 22 slaves. He died when Henry was four years old and left each of his children two slaves as an inheritance. After his father’s death, his mother remarried, to Captain Henry Watkins. He was also a planter and was kind to her previous children. Henry had seven half-brothers from his mother’s second marriage.

When the family moved to Kentucky in 1791, Henry stayed behind. His step-father arranged for him to work at a store in Richmond while a clerkship position at the Virginia Court of Chancery became available. Henry obtained the clerkship one year later and became the secretary of George Wythe, one of the signatories of the Declaration of Independence of the United States. Wythe was very influential in Henry’s life. It was from him that Clay adopted his unfavorable views on slavery, although he remained a slaveholder all his life.

Wyeth obtained a position for Clay with the Virginia attorney general, but after passing the Virginia bar to practice law, Henry decided to move to Kentucky.

In 1797, Henry Clay moved to Kentucky and set up his private law practice. He purchased some land and established a plantation. He also began his incursion into politics and joined the Democratic-Republican party. He became known for his public speaking skills. In 1803, Henry became a representative of Fayette County in the Kentucky General Assembly. In 1806, and again in 1810, he was elected to the Senate to complete the terms of senators who had resigned.

In between his terms in the Senate, he moved back to Kentucky and in 1807 became Speaker of the House of Representatives of the state. Later on, he was elected to a place in the United States House of Representatives and won. He joined in 1811 and was elected Speaker on his first day. He would subsequently be re-elected several times as a member of the House and Speaker, although with some interruptions between terms.

Henry Clay favored a hostile position towards Britain and was in favor of the war in 1812. However, he was also part of the 5-member team sent to Europe in 1814 he to negotiate peace with Britain. The treaty was signed in December 1814, and he returned to the States in 1815. He was re-elected to the House and was again chosen as Speaker.

Clay promoted the idea of gradual emancipation of slaves. In 1816, he became the first president of, the American Colonization Society. The purpose of this organization was to create a colony of freed black Americans in Africa. This resulted in the creation of Monrovia in present-day Liberia.

He developed an economic program that came to be known as his “American system.” This program included the establishment of protective measures for the American industry, like imposing tariffs on British goods. It also involved the creation of a national bank and government contributions for transportation projects. Throughout his career, he fought to maintain peace between the states to prevent a Civil War.

Clay supported the independence movements in Latin America. He promoted the recognition of the newly formed nations by the American government. Later on, as Secretary of State, he also moved to secure trade treaties with these countries, to ensure the United States’ privileged position in the region, as opposed to European powers.

In 1822, Henry Clay was once again re-elected to the House of Representatives and ran for president in the elections of 1824, but lost. However, the elected president John Quincy Adams offered him the position of Secretary of State, which he accepted. He held this position from 1825 to 1829.

In 1831 he was elected to the Senate. He served from 1831 to 1842, and then again from 1842 until his death in 1852. In 1832 he ran for president back but lost. He became the leader of the Whig party, which emerged from the opposition to President Jackson’s policies. In 1844 Clay again ran for president but was unsuccessful.

In 1799, Henry Clay married Lucretia Hart. They had 11 children, including six daughters and five sons. Seven of them died before him, including all his daughters. They died either from disease or childbirth complications. One of his sons, Henry Clay, Jr., died in the Mexican-American War.

In spite of Clay’s views on slavery, he continued to own slaves all his life. Near the end of his term as Secretary of State, when he was about to return to his Kentucky plantation one of his slaves, Charlotte Dupuy, sued him for her freedom. He decided to fight her in court and eventually won. He sent her to serve in his daughter’s house, where Charlotte remained a slave for ten more years. Clay granted her her freedom in 1840.

Henry Clay died of tuberculosis on June 29, 1852, at the age of 75. He was serving a term in the Senate but had previously announced his intention to resign due to declining health. He declared all of his slaves free in his will. His wife Lucretia outlived him and passed away in 1864 at the age of 83.

Although the Whig party disintegrated after his death, Clay’s ideas continued to be influential. He was much admired by Abraham Lincoln, who shared his view on the gradual emancipation of slaves. In 1957, Clay was declared one of the five greatest Senators of the United States. There are many monuments and memorials dedicated to Henry Clay’s memory across the US, including schools, city streets, and a town in Pennsylvania (Claysburg).