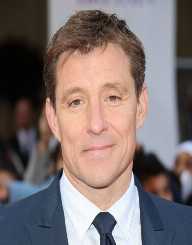 Ben Shephard is a British television presenter who is best known for hosting Tipping Point and Ninja Warrior UK.

Shephard was born on 11 December 1974 in Epping, Essex. He attended an independent school, Chigwell School, in Essex. Upon graduation, he went the University of Birmingham to study dance and drama. Shephard was also a keen sportsman who played both soccer and rugby. He played for Everton F.C as a youth player but was released by the club. He graduated with an honors degree in Dance, Drama and Theatre Arts.

Shephard began his presenting career with Channel 4. He co-hosted The Bigger Breakfast with Dermot O’Leary, Melanie Sykes, and Josie D’Arby. He also the first presenter on T4, Channel 4’s teen orientated broadcasts. In 2000, he appeared as a presenter on MTV and BBC for the first time, although it was for a short stint. Shephard began working with ITV in 20000, and he would spend most of his career with the production company. He started as a co-presenter on Entertainment Today and worked on the show for eight years. Entertainment Today was part of the wider Good Morning Television show (GMTV), and Shephard would also present GMTV as a stand-in and became one of the main hosts after 2005.

Shephard left GMTV in 2010. In 2002, Shephard had a bit part in the NBC show Friends; he played ‘man with microphone.’ 2004 saw Shephard host the Xtra Factor, the spin-off to the X-Factor singing contest. Shephard left the Xtra Factor in 2006 after he was passed over for the position of hosting the main show, the position went to a former colleague, Dermot O’Leary. Shephard returned to BBC in 2008 and hosted the quiz show one vs. 100. The show was part of the U.K National Lottery broadcast. Shephard began one of his best-known shows in 2009. He was made the host of ITV’s relaunch of The Krypton Factor, a game show. Shephard began working with Sky Sports in 2010; he hosted their Champions League football show until 2014 when Sky lost the rights. Shephard also began hosting Sky Sports’ Goals on Sunday programmes, which was a highlights show of games from the English Premier League, Championship, and Scottish Premier League.

Shephard is still the host of Goals on Sunday. In 2012, Shephard began working on his best-known show Tipping Point. Tipping Point is a quiz show on ITV where contestants try to win by collecting counters out of a coin-pusher arcade machine. In 2014, Shephard became a host on Good Morning Britain, ITV’s replacement for GMTV, and remains a host with Susanna Reid. Shephard has so far hosted three series of Ninja Warrior UK, a game show where contestants tackle an obstacle course.

Shephard plays an uncredited extra in Harry Potter and the Half-Blood Prince.

Shephard has supported numerous charities and has completed fourteen marathons in his efforts to raise money for them. He has been a long-time supporter of the Cystic Fibrosis Trust, Haven House Children’s Hospice and the Holly Lodge Centre. Shephard has made six appearances at Soccer Aid, a charity match between England and the Rest of the World were the teams are made up of ex-pros and celebrities. Shephard was infamously red carded in 2016 for a foul on former pro-Dimitar Berbatov. Shephard climbed Kilimanjaro in 2009 50 raise money for Comic Relief. Shephard ran coast to coast in Britain to raise money for the Children’s Heart Fund Unit.

Shephard married his wife, Annie Perks, in 2004 and they have two sons together.