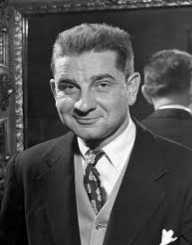 Charles Samuel Addams is regarded as one of the most talented and creative cartoonists in American history whose incredible works have been continuously featured in the New Yorker. One of his most creative innovations was the humorously macabre, i.e., the Addams Family.

His primary themes that revolved around his works were related to dark humor, and he signed his cartoons as Chas Addams. His creations were such that some of his characters were even used as spin-offs in several other mediums of media as well.

Charles Addams was born on 7th of January in the year 1912 in Westfield, New Jersey. He was born to Grace M. Spears and Charles Huey Addams who was an executive in a piano company. His talent could be seen from his early ages only. He especially liked the macabre and also had a strange fascination for coffins and skeletons in the form of a good practical joke.

Charles got his early education from Westfield High School and then went to Colgate University for his higher education for two years which was again followed by a college degree from the University of Pennsylvania. Later, Addams shifted to New York City and enrolled himself at the Grand Central School of Art. He was always encouraged by his father to draw since his early ages which motivated him a lot.

Though he remained there for a year only but still ensured his stay in New York City and worked there. He got the job at the New Yorker magazine as a cartoonist. Even though the pay he received was modest but the liberty provided by the magazine allowed him to explore his voice and imagination in the arena of dark humor.

Charles Addams even joined the army for a short period but, once he returned his work was appreciated nicely by fans for several reasons. This was the push he needed to venture into the darkest and ghoulish places for ideas where no artist would want to go. But with the rising popularity, he became one of the biggest and most celebrated names in Hollywood, and many celebrities wanted to meet Charles Addams by then.

Some of the celebrities that were amongst his fans were Cary Grant who also referred Charles Addams as “A Defrocked Ghoul.” He became favourite of many other celebrities including Alfred Hitchcock, who even showed up at Addam's New York home even without telling him to meet him in person to see the cartoonist in the flesh.

By the early 1980s, Charles Addams had written 12 books which were exhibited at some of the most renowned places like the Fogg Art Museum, the Metropolitan Museum of Art, and the Rhode Island School of Design, and many others. He always signed his work the name: Chas Addams intentionally that was short-handing of his first name with an explanation that said, "It looks better than writing out Charles."

Charles Addams was honored with many prestigious awards for his outstanding projection of something never thought of. Some of the awards which Charles Addams won were the ‘Humor Award’ from Yale. He also received an honorary doctorate from the University of Pennsylvania along with a special award from the Mystery Writers of America.

Charles Addams met his first wife, i.e., Barbara Jean Day when he served at the Signal Corps Photographic Center in New York, but the marriage ended after eight years when Addams refused to adopt a child.

He then married Barbara Barb in the year 1954 who was a practicing lawyer but the couple divorced in the year 1956. But later Charles Addams married Marilyn Matthews Miller for the third and the last time. She was also known as “Tee.”

The legendary cartoonist Charles Addams died on 29th of September in the year 1988 at the age of 76. He died at St. Clare's Hospital and Health Center in New York City, because of a heart attack that he suffered after parking his automobile.