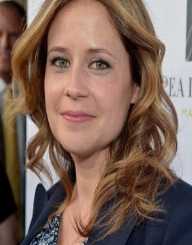 Jenna Fischer is an American born actress born on March 7th, 1974. She is a 2007 Emmy-nominated actress famous for her role as Pam Beesly on NBC series. This series is a great hit. Her role in acting premiered when she acted for the UCLA Medical Center video. The video is meant for sexual education. Besides her acting career, Jenna Fischer is the Proactiv Skincare Solutions’ spokeswoman.

Also, she has worked She acted a role in The Office alongside John Krasinski, Steve Carell and Rainn Wilson among others. Jenna Fischer began her acting career at a young age. She was only six when she started acting. Seemingly, she was born a star. Acting is part of her DNA. Being a skilled actress, her fame began quite early in her life.

Jenna Fischer was born on March 7th, 1974. Her place of birth was in Fort Wayne, Indian in the United States but brought up in St. Louis in Missouri. She is the daughter of James Fischer and Anne. Her father is an engineer. On the other hand, her mother is a history teacher. Emily is her younger sister.

At the age of 6, Jenna Fischer had begun her role in acting. She had a role in an acting workshop in Henry School situated in St. Louis. Her mother taught the workshop.

In 2003, Jenna Fischer starred in The Girl's Guide to Summer. Later in 2005, she featured in The Office acting the role of Pam Beesly. Her career became more established with this role especially after The Office gained success.

In 2006, she acted in the film Slither. In the same year, she had a role in Bravo's Celebrity Poker Showdown. The next year she performed as a supporting character in The Brothers Solomon, Blades of Glory and The Dewey Cox Story. Later in 2009, she finished her acting in Solitary Man and A Little Help.

Jenna Fischer starred in Willie Wisely "Through Any Window" music video by Willie Wisely in 2007. She also appeared in Darque Magick from episode 25, a film written by Jenelle Riley. In April 2017, Fischer featured in My Houzz of the Houzz series.

In 2000, Jenna Fischer got married to James Gunn her first husband. Seven years later, the couple went separate ways. Subsequently, Lee Kirk tied the knot with her. Together they are blessed with a daughter and a son.