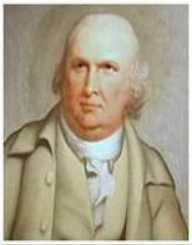 Robert Morris was an American businessman and banker. He was the primary sponsor of the American Revolution and an original signatory to the Declaration of Independence document.

Robert Morris was born in Liverpool, Great Britain on January 20, 1734. He left England for America when he turned 13. He settled in the colony of Maryland where his father had established a flourishing tobacco farming business.

He was educated in Philadelphia. After graduating from school, he got employed in a shipping company. In 1753, he became a partner in the shipping company. The company transformed its name from Willings to Willing and Morris. For almost four decades, Morris was a partner-director at the company.

Robert Morris' participation in the revolution was majorly passive. In 1765, he opposed the Stamp Tax imposed on all traders in the colonies. He stayed away from most protests until the onset of the American Revolution. In 1775, he joined in the struggle for independence from Britain. He was chosen to represent Philadelphia in the Continental Congress. This was the precursor of the US Congress.

He served on various influential committees within the Congress. The Continental Congress voted to let his firm import ammunition for the revolution. Though most of his peers knew his business dealings with Britain, they trusted his business acumen and honesty.

In 1776, Congress voted on a motion of independence. Robert Morris voted against independence. He favored reconciliation and an amount of autonomy rather than full independence. He lost the vote to the propagators of independence. Under pressure from his delegation in Philadelphia, he later signed the Declaration of Independence document. He maintained the supply of arms and other essential rations to the Continental Army headed by General George Washington.

He resigned from the Congress in 1778. The following year, he was investigated for financial malpractice during his contract to secure arms for the Continental army. Congress censored and vindicated his company Willing & Morris from any wrong. Another Congressional Committee investigated his dealings and exonerated him. He served in the Philadelphia local assembly from 1778 to 1781.

Congress approached Robert Morris to head its financial department and revive the dwindling economic fortunes. Morris accepted the office in 1781. He consolidated all the fiscal committees under his office, essentially creating the first Department of Finance. He instituted strict financial and accounting procedures to individual states within the Union. He mostly cut spending to key government departments.

He expedited the remittance of financial taxes from the states to the national treasury. He used his network to raise funds to fund the deficit. He took a personal loan from the French government to secure the running of the economy during the war.

Morris founded the first official government back in December 1781. It began its banking operations after gaining its charter in January 1782. He used the bank proceeds to finance the George Washington armed campaign against Britain.

When the individual states in the confederation refused to remit taxes to the treasury, the congress debt increased. Unable to control the financial downfall, Morris resigned from office in November 1784.

Despite his brilliance in mixing public and private businesses, Robert Morris was an astute politician. He served in the Philadelphia Assembly for two consecutive terms. His financial knowledge kept the Continental Congress afloat in desperate times until the stability of the US currency. He was one of the two American founding fathers who signed all the tree primary independence documents.

Together with Connecticut congressional delegate Roger Sherman, Morris signed the Declaration of Independence belatedly. He also signed the Articles of Confederation which stipulated the relations between the individual colonies, the Constitution which created the United States of America.

Robert Morris steered away from partisan politics instead of engaging in national politics. Morris helped negotiate trade deals between the federal states within the union. In 1789, he declined an offer by President George Washington to be the US first Secretary of Finance. He ran for the Senatorial seat instead, serving from 1789 to 17895. In 1790, Morris negotiated a deal with the state of Virginia to cede land for the creation of the national capital Washington DC.

After leaving public office in 1784, Robert Morris went back to his private trading business. Known for his risky business ventures, Morris started his merchant trading with the east. He sent merchant ships to the Indian subcontinent and as far as China. He ventures in purchasing land for speculative purposes. He overstretched his financial credit and found himself.

He started the construction of his retirement mansion in Chestnut, Philadelphia. Unable to finance his debts, Morris was tried in court and ended up in jail in 1798. He was released in 1801 after filing for bankruptcy after Philadelphia passed the Federal Bankruptcy Act. He gained his freedom but lost all his properties to his creditors. He lived on his wife’s pension until his death.

Robert Morris died aged 73 on May 8, 1806, in Philadelphia. He was a business giant during the revolutionary war. He sacrificed his interests for the creation of a financially sound USA. In the end, he became the only US founding father to be imprisoned and later declared bankrupt. Most of his fellow signatories of the independence documents became larger than life US statesmen.