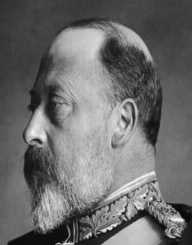 Born as Albert Edward, King Edward VII was the King of the United Kingdom and the British Dominions. Born on November 9, 1841, he was also an Emperor of India from January 22, 1901 until he died in 1910. Before succeeding his mother as a King, Edward VII was the heir apparent and the Prince of Wales and was the Duke of Cornwall and Rothesay since childhood. As heir apparent, he was a representative of Britain on visits abroad and performed ceremonial public duties.

With his nine-year rule as king, Edward VII initiated an upgrade of the British Home Fleet and the Army after the Second Boar War. His reign also saw the cordial relations between the country and neighboring European countries especially France. Nonetheless, there were friction between him and the German Emperor Wilhelm II who happened to be his nephew.

Edward VII was born on November 9, 1841, in Buckingham Palace to Queen Victoria and Prince Albert of Saxe-Coburg and Gotha. He was the eldest son but second child of his family. He automatically became the Duke of Cornwall and Duke of Rothesay as a first son of his parent. Albert also held the names Prince of Saxe-Coburg and Gotha and Duke of Saxony since Edward VII was the son of Prince Albert. When he was just a month old, he was named the Prince of Wales and Earl of Chester, and at age eight, this is on January 17, 1850, the Earl of Dublin.

Edward VII started his education at age seven under strict supervision of his parents. His father designed an extensive program for him to prepare him to be a model constitutional monarch. However, Edward as not good academically and could not meet his parent's expectation. His education was taken over by a personal governor Robert Bruce after his secondary education. On November 9, 1858, Edward VII became a Knight of the Garter. In 1859, he embarked on an educational trip to Rome and later that year, studied at the University of Edinburgh under the tutelage of chemist Lyon Playfair. His education improved as he grew, and in October 1859 enrolled at the Christ Church, Oxford. He later moved to Trinity College, Cambridge in 1861.

Edward VII renounced his right as the Duchy of Saxe-Coburg and Gotha to his younger brother Prince Alfred on 1863. On May 24, 1867, was named a Knight of the Thistle.

After his education, Edward VII embarked on a tour to North America in 1860being the first British heir to do so. His visit was to Canada and America where he undertook several activities including the inauguration of Victoria Bridge, Montreal across the St Lawrence River and paid his respect at the tomb of George Washington in the accompany of President James Buchanan. He decided to pursue a career in the British Army but that his mother vetoed decision. A year after the North American tour, he traveled to Germany where he met Princess Alexandra of Denmark

As an heir apparent to the throne, Edward VII was not given many roles in the ruling of the country because she found him to be irresponsible due to his frivolous acts. He was prevented from having copies of original important government document even though he was sent summaries of them. Edward VII contracted typhoid during his stay at Londesboruough Lodge. His almost death situation improved his relationship with his mother after he was healed. The sickness was also met with great national concern since his father Prince Alfred died of the same disease. His recovery came with great joy and nationwide celebrated. Edward’s successful eight-month tour to India in 1875 resulted in Queen Victoria acquiring the title Empress of India by Parliament.

Edward VII was a fan of arts and sciences, helped in the founding of the Royal College of Music, which he opened in 1883. On April 4, 1900, there was an assassination attempt on Edward during a trip to Denmark through Belgium.The attempt made by a fifteen-year old Jean-Baptiste Sipido bya gunshotwas in protest of the Boer War. Sipidowas acquitted by a Belgian court because he was a minor. The development fueled the rift between Belgium and Britain as well as other European countries.

Edward VII was made the King of the United Kingdom after his mother Queen Vitoria died on January 22, 1901. He also became the Emperor of India and King of the British Dominion. Instead of his name Albert Edward, he chose to rule with the name Edward VII. Two days to his coronation, which was schedule on June 26, 1902,  he was diagnosed with appendicitis which was fatal at the time. Edward VII was operated upon by Sir Frederick and Lord Lister and was finally crowned on August 9, 1902, at the Westminster Abbey by Archbishop of Canterbury, Frederick Temple.

During his reign, he restored traditional ceremonies including State Opening of Parliament which was cancelled by Queen Victoria. He then introducedhonours like the Order of Merit tohonourcontributions to the arts and sciences. He then embarked on an European tour, to several countries, which gained his the name Uncle of Europe. Edward’s reign saw a massive development in the British army armory and an upgrade in the British Home Fleet.

On March 10, 1863, Edward VII was married to Princess Alexandra of Denmark at St George’s Chapel, Windsor Castle. As royals, the two made the Marlborough House their London residence and Sandringhan House in Norfolk as country retreat. Their marriage was however, met with several disapproval especially from the Germans since Queen Victoria had German relations and the Germans were having friction with Denmark. Aside from his official marriage, Edward VII had several mistresses.

He died on May 6, 1910, age 68 of heart attack. He had suffered bronchitis due to his severe smoking habit. He smoked 20 cigarettes and 12 cigars per day. On a state visit to Berlin, in 1909, she suffered serial of loss of consciousness and collapsed while at Biarritz in March, 1910. His bodywas interred at St Georges Chapel on May 20, 1910.