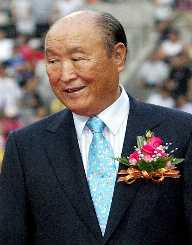 Sun Myung Moon is associated with the Unification Church which he founded and known as an ardent spiritual leader. He called himself the messiah who would bring about a new perspective in the religious entity. He became a Christian as a young lad who saw his family embracing the conversion as well.

The oppression and injustices that encompassed him brought about the zeal to bring about a religious revolution. He supposed that with religious values and spiritual uprightness, suffering and distress would be solved. Sun Myung Moon extended his religious movement to the United States in a bid to liberate the world beyond.

Birth name was Mun Yong-myeong and born on 25 February 1920 in North Korea in a family of eight children. Sun Myung Moon was brought up in a family which held a somewhat cult religion which later became a Christian family. He, at the age of 10 years together with his family became members of the Presbyterian Church. Korea was still a colony of Japan and the oppression it faced made Sun Moon determined to end it. He could see how the injustices were rampant in his country and thought about how he could be a change himself.

At the age of 15, Sun Myung Moon said he had been in a trance where he saw Jesus bidding him do the work of discipleship and proclaim peace. In 1941, he went to the Waseda UniversitywhUniversity to do an electrical engineering course. He was also involved in political activism while in school but was apprehended and kept under torture. He faced another five years in prison from 1947 on grounds of treason. He was able to break from prison in 1950 before his jail term was over.

Sun Myung Moon soon became a zealous religious pioneer after his escape from Hungnam labor camp. It is in the southern port city of Pusan that moon developed a more deep interest in spiritual things. He won the soul of one follower who would soon join him in building the Unification Church which had a simple rugged structure. Having only countable followers with him, he was never discouraged for he knew the path he took was worth the cost. By 1954, he had acquired several other members and formed the ‘Holy Spirit Association for the Unification of World Christianity.’

However, Sun Myung Moon was considered a nuisance by the authority which saw him landing in jail a couple of times. Despite these challenges, he would still stand firm for his beliefs and he later founded the ‘Weeping Church.’ The name of the church came about as a result of his members holding prayerful meetings in tears.

Some of the activities he introduced include ‘Blessing Ceremony’ which brought about unity of the church. Sun Myung Moon had churches founded in about 30 cities in Korea at the onset of 1957, followed by Korean Culture and Freedom Foundation in 1964. In 1972, the International Conference on the Unity of Sciences was established in America a year after he relocated to U.S. apart from religious and spiritual matters, the Unification Church hold a number of businesses which sustains it and other people as well.

Sun Myung Moon began a family with Sun Kil Choi when he married her on April 28, 1945. The couple was blessed with a son but they divorced in 1957 after much attempts to stay close together to no avail. He engaged a young girl HakJa Han and married her in 1960, 11 April. Together with Hak, Moon had a total of 13 children.

Sun Myung Moon passed away at the prime age of 92 on 3 September 2012 in Gapyeong County, Gyeonggi-do, South Korea.