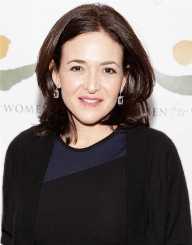 Sheryl Kara Sandberg was born in Washington, D. C., on August 28, 1969. Her mother, Adele, was a French professor. Her father, Joel, was an ophthalmologist. When she was two years old, her family relocated to Florida.

Sheryl Sandberg studied at the North Miami Beach High School. She was at the top of her class, and she joined the National Honor Society. She enrolled at Harvard University to study economics. There, she was one of the co-founders of the Women in Economics and Government organization. She earned her degree in 1991. In 1995, she got her MBA from Harvard Business School.

Sheryl Sandberg worked with her professor, the economist Larry Summers. She was part of his research team at the World Bank. In 1995, she got a job as a management consultant at McKinsey & Company. From 1996 to 2001, she again started working for Larry Summers, who was serving as the U. S. Secretary of Treasury. After that, she got a job at Google. There, she was responsible for the sales and advertising.

In 2008, Sandberg became the Chief Operating Officer of Facebook. She started working on the sales, marketing, and advertising, as well as the communications and human resources. In 2012, she became a part of the company’s board of directors. In 2018, she was one of the main people dealing with Facebook’s scandals with the Russian interference in the elections and with the Cambridge Analytica data collecting.

Sheryl Sandberg is on the boards of several other companies, such as Disney, Starbucks, V-Day, and others. She gave the Commencement Address at Barnard College, Colgate University, Harvard Business School, Virginia Tech, the Massachusetts Institute of Technology, and at the University of California at Berkeley. In 2010, she gave a TED talk on women leaders. She supported the ONE campaign and the Ban Bossy campaign.

Sheryl Sandberg has been ranked on many lists for successful and influential people by magazines such as The Wall Street Journal, Forbes, Fortune, Time, Business Week, and others. Her current net worth is more than one billion dollars.

Sheryl Sandberg's first husband was called Brian Kraff. They got married in 1993, and they got a divorce after a year. She married Dave Goldberg, an executive at Yahoo and Survey Monkey, in 2004. He passed away unexpectedly in 2015. They have a daughter and a son together.