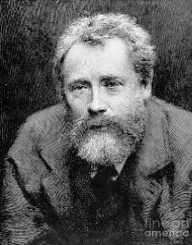 William Ernest Henley was an English poet, editor, and critic of England’s late Victorian era. Born on August 23, 1849, he is considered to have played an influential role in the literary circle of his time by introducing works of some of the 1890s great English writers in his journal. Henley is known for his poem “Invictus,” 1875, written to exhibit his strength, passion and fighting spirit after tuberculosis caused the amputation of his foot.

William Ernest Henley was born on August 23, 1849, in Gloucester, England. He was the first of six children by Mary Morgan and William Henley. He received education at the Crypt School in Gloucester from 1861 to 1867.

The headmaster of the school, Thomas Edward Brown, discovered the great potential in Henley, leading to a lifelong friendship between the two. Henley contracted tuberculosis of the bone at age 12, causing the amputation of his left leg below the knee in 1869. His frail health frequently interrupted his education. He passed the Oxford Local Schools in 1867.

After successfully passing his exams, William Ernest Henley moved to London, where he sought to work as a journalist. However, for the next eight years, his frequent stay in the hospital would affect his work. Tuberculosis had affected him significantly that to save his life, the amputation of the other leg became necessary. It took the pioneering skills of surgeon Joseph Lister of the Royal Infirmary of Edinburgh to avert the second amputation.

From 1873 to 1875, William Ernest Henley was confined at the hospital, and it was during this period that he began writing impressionist poems about the hospital atmosphere. He wrote several poems, collected in “In Hospital.” During this period, he became friends with Robert Louis Stevenson, who based some part of the character Long John Silver, in his work Treasure Island on Henley.

Henley gained a reputation as an astute poet in the late Victorian era. His influence in the artistic circle became even higher during his career as editor of journals and magazines.

William Ernest Henley had the opportunity to publish his poems in the magazines his edited. His best-known poem, Invictus, was published in 1875 and was among his hospital poems. His other works include London Voluntaries (1893), Poems (1898), Hawthorn and Lavender (1899), and For England’s Sake (1900).

Bouncing back to live, William Ernest Henley began working as a journalist and publisher. He worked as an editor for the society paper, The London, from 1877 to 78. He anonymously contributed several poems to the paper.

From 1882 to 1886, he edited The Magazine of Art, through which he promoted works of Auguste Rodin and James McNeil Whistler. Henley’s next editing position was with the Edinburgh journal, Scots Observer. He continued to work with the journal after it was moved to London in 1891 to become National Observer. He left his position in 1893.

On January 22, 1878, William Ernest Henley married Hannah (Anna), Johnson Boyle. They had a daughter, Margaret Henley, who had frail health and speech difficulty. She died at age 5. Henley did not fully recover of tuberculosis and died of it on July 11, 1903, at age 53. His remains were cremated and the ashes buried in his daughter’s grave in the churchyard at Cockayne Hatley, Bedfordshire.