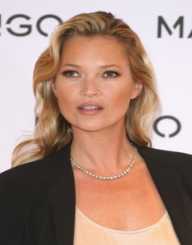 What has become to be known as waif look is attributed to model Kate Moss’ contribution? With her thin model look, she took the modeling world by storm and brought in a new perspective away from the standard known trends. At the age of 15, she made his first cover shot just a year after being discovered. Going forward, she became famous through several ad campaigns and appearance on top fashion magazines. Her thin body is now a brand, and she continues to be a pop culture and fashion icon for top brands and fashion.

Kate Moss was born in London, England on 16th January 1974. The incredible thin body is what created a stir in the modeling world, and the waif look came into existence. Her career started as early as the age of 14. She was discovered at age 14 at the John F Kennedy airport in New York. The following year she made it to the top of a British magazine as her first shot. That was the stepping stone to her modeling career.

In 1993, she featured in the designer Calvin Klein Obsession campaign. That made Moss famous, and her demand rose as she became the most sought after model. She received both positive and negative reviews from all walks of life about her new thin body in the advertising industry.

As others viewed her young image as beautiful and attractive, others thought she needed to add some weight since she appeared skinny and looked like suffering from some eating disorder. Such negatives comments, however, did not deter her progress and Moss continued to thrive well professionally.

Kate Moss appeared on more than 300 cover magazines and starred in advertising campaigns for top fashion houses like Christian Dior and Chanel. In 2005, she won the Fashion Icon award from the fashion designers of America.

The British police decided not to charge her with any crime, and that's why she bounced back quickly. Before resuming entirely to her career, she went for treatment at the Meadows Clinic in Arizona for drug rehabilitation. By the following year, she got back some of the major contracts which had pulled out during the previous controversies.

Companies like Burberry and Calvin Klein were back on board.  In 2006, she signed a deal with Topshop to enable her to design and sell her clothing collection. To add on that, she started to sell the perfume called Kate in 2007. Going forward, several scenes were added to the brand perfume.

Away from the fashion world, Kate Moss became a pop culture icon. She has featured in various rock videos for prominent artists like Elton John and The White Stripes.

Away from the modeling lifestyle, Kate Moss leads an own tumultuous life. She admitted having begun smoking marijuana and drinking from the tender age of 12 years. The lifestyle remained the same even as her modeling career took off. She was involved in media controversy that revolved around drugs and alcohol.

Some of her photos appeared in the British newspaper in September 2015 in which she was doing drugs. She was alongside her boyfriend Doherty Pete who was the lead singer in the Babyshambles band. He is quite known about drug-related cases because he had been arrested severally for similar offenses. The newspaper publication made Moss lose most of the lucrative modeling contracts she had signed with top agencies like the H&M clothing retailer company.

Her relationship with Doherty finally ended for good in 2007, after several attempts to reconcile failed utterly. Kate Moss began dating Hince Jamie of the Kills rock band. They got married in 2011. Before the two relationships, however, she had a daughter called Lila Grace with her ex-boyfriend Jefferson.