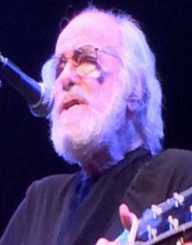 Songwriter, singer, and musician Robert Hunter was Robert Burns born in 1941 in San Luis Obispo, California. The Scottish Romantic poet Robert Burns is said to be his ancestor. Hunter’s father left his family when Hunter was a young child, and he spent time in foster homes.

After his mother remarried, Hunter lived with her and his stepfather, Norman Hunter and he took on his stepfather’s surname. The family moved to Connecticut when he was in his teens.

Robert Hunter graduated from Palo Alto High School and later spent a year studying at the University of Connecticut.

During his late teens, Robert Hunter played the trumpet in a band, The Crescents, in Connecticut. He then moved to Palo Alto where he met Jerry Garcia. The two musicians teamed up, forming a bluegrass duo. As Garcia became more interested in bluegrass and old-time music, Hunter would accompany him on the mandolin. At that stage, Hunter was starting to become engrossed with words and lyrics, while Garcia was perfecting his guitar style.

Hunter was taking amphetamines when he wrote China Cat Sunflower which became a Grateful Dead song. He drifted through the late 1960s and spent time in Sante Fe, New México before returning to Palo Alto. Garcia formed an electric band, the Warlocks with Ron McKernan, Bill Kreutzmann, Bob Weir and Phil Lesh doing cover songs of the Rolling Stones, The Lovin’ Spoonful, Bob Dylan and others.

Garcia’s band eventually changed their name to the Grateful Dead and decided to focus on writing their music. Garcia asked Robert Hunter to assist with putting lyrics to his music. By the Grateful Dead’s third album Aoxomoxoa (1969), Garcia and Hunter had written all songs. Lyrics he wrote include Uncle John’s Band, Ripple, Eyes of the World, Dire Wolf, Touch of Grey, Standing on the Moon and Dark Star, Friends of the Devil and Sugar Magnolia.

Garcia wrote most of the music. The Grateful Dead’s most prominent commercial hit was with Touch of Grey in 1967. Robert Hunter released his albums including Tales of the Great Rum Runners (1974) and Tiger Rose (1975).  Musicians who have covered Hunter’s work include Tom Petty and the Heartbreakers, Elvis Costello and Willie Nelson. One of Hunter and Garcia’s final songs was Days Between (1993). Because of his musical collaboration providing lyrics, Hunter was viewed as a non-performing artist of The Grateful Dead.

Garcia died in 1995 and, Robert Hunter continued writing songs for other artists. He also opted for the Grateful Dead’s tour in 2004. Collaborations include working with Bob Dylan, working on his album Together Through Life (2009)  and with David Nelson on the Where  Come From (2009).  He occasionally tours playing acoustic guitar and performing his classic songs plus other work. Hunter is also a published poet. The publication A Box of Rain (1990) is a collection of Hunter’s songs ranging from 1965 up until 1990.

Robert Hunter was the first only non-performing artist to be inducted into the Rock and Roll Hall of Fame in 1994 when he was inducted along with the other members of the Grateful Dead.

In 2012, Hunter was awarded a Lifetime Achievement Award by the Americana Music Association. Hunter and Garcia were inducted into the Songwriters Hall of Fame in 2015.