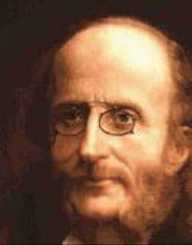 German composer and cellist Jacob Offenbach was born in Cologne, Germany on the 20 June 1819. Showing musical ability early, by the age of 9 he was a member of a family music group. Isaac Juda Eberst, his father was a music teacher and composer.

Joseph Alexander and Bernhard Breuer both taught Jacob Offenbach music. As a child and youth, he played the violin and the cello. After studying at the Paris Conservatoire, he joined various orchestras appearing at the Opera-Comique.

Recognition of Jacob Offenbach as a gifted cellist began in the 1840s when he appeared in performing his work. He took up the position of conductor at the Comedie-Francaise in 1850.

Jacob Offenbach set up Bouffes-Parisiens for the Paris Exhibition of 1985 which was a huge success and led to a full-time permanent position as director of the Bouffes-Parisiens. Appointed director in 1862, Offenbach experienced increasing popularity during that decade and in the early 1870s. His operettas include The Grand Duchess of Gerolstein, Underworld, La Vie Parisienne, and La Perichole.

After his early success, Offenbach ran into financial difficulties when demand for his music tapered off in the mid-1870s. He then toured America and wrote a book about the experience, Offenbach in America. His continued composing operettas and wrote a serious opera, The Tales of Hoffman. Ernest Guiraud finished the opera in 1881 after Offenbach died in 1880 without completing the work.

Jacob Offenbach's work influenced the development of the genre of musicals with the success of his light operettas. His early work is associated with the Can-Can era in Paris, France. He wrote dozens of works and performances of his work remain popular.

Jacob Offenbach married Herminie de Alcain in 1844, and they had one child, a daughter together.