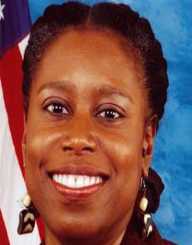 American politician and activist Cynthia Ann McKinney was born on the 17 March 1955 to James Edward McKinney and Leola Christion McKenney in Atlanta, Georgia. Her mother Leola was a nurse and her father, James Edward a police officer, civil rights activist and legislator in the Georgia house of representatives. Her father, known as Billy McKinney, was also one of the first African American officers in the Atlanta police department. From a young age, McKinney went on demonstrations with her father, and this inspired her to go into politics.

Cynthia McKinney did her high school at St Joseph High School. She then enrolled at the University of Southern California and obtained a BA in international relations. She also did graduate studies at the Fletcher School of Law and Diplomacy at Tufts University in Massachusetts. In 1984, McKinney was a diplomatic fellow at Spelman College, Atlanta.

In the mid-1980s, Cynthia McKinney taught at Agnes Scott College, Decatur as well as at Clark Atlanta University. Her father registered her as a candidate for the Georgia state house of representatives where she won 20 percent of the vote. Then in 1988, McKinley was elected an at-large state presentative in the Georgia legislature. Father and daughter became the first to serve concurrently in the same state legislature. Instead of agreeing with her father on issues, she asserted her independent style, and they often disagreed on issues.

Cynthia McKinney and other Georgia legislators petitioned the U.S. Justice Department to create additional majority-black congressional districts, and in 1992, two additional majority-black districts were created. McKinney ran in a huge district that covered most of DeKalb County east of Atlanta to Augusta as well as the coastal city of Savannah. The area encompassed 22 counties and contained a diverse range of constituents from inner-city and residents to agricultural communities.

McKinney relocated to the district and her father, Billy McKinney, managed her campaign. McKinney eventually won 54 percent of the vote. She then won election to the 103rd Congress (1993-1995) with 73 percent of the vote against her opponent Republican Woodrow Lovett. She was sworn into the 103rd Congress in January 1993. During her time in Congress, she was on the Committee on Agriculture, the Committee of International Relations. During the 104th Congress, she was also on the Banking and Finance Committee for two terms (1995-1997) and in the 105th Congress (1997-1999), she was on the National Security Committee.

In Congress, Cynthia McKinney retained the independent style she had shown in the Georgia legislature. She strongly opposed the first Gulf War. In 1995, she attacked Newt Gingrich because he had accepted free airtime on cable television to broadcast a college course. She criticised Vice President Al Gore for not having more African Americans on his security team (2000) and later asked the Clinton administration to investigate charges of discrimination within the Secret Service.

In 2002, McKinney lost the Democratic primary race to Denise Majette. She then regained her seat in the House representing the 4th District. During this time she was highly critical of the government’s handling of the aftermath of Hurricane Katrina (2005). In 2008, she was beaten by Democrat Henry C. Johnson for the 4th District candidature. In 20087, she stood as a Green Party presidential candidate

Cynthia McKinney was a vocal opponent of U.S. military intervention in Libya in 2011. She went to Libya in June that year and was critical of the United States and NATO. She then on a national tour in the US called Eyewitness Libya. In 2012, she declared that she would run for the 4th congressional district, but failed to qualify.

Cynthia McKinney was accused of striking a Capitol Hill police officer when she tried to evade a metal detector. She was cleared of any wrongdoing.

Cynthia McKinney was married to Coy Grandison, and they had a child together, Coy Grandison Jr. The couple later divorced.