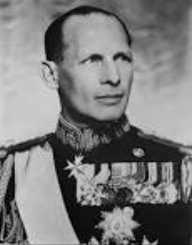 King George II, also known as Georgios II, was the ruler of Greece.

King George II, became involved with the military and trained with the Prussian Guard. In 1912, he served in the 1st Greek Infantry during the Balkan Wars. The following year, his grandfather died and his father became king, making him the crown prince. In 1917, he left Greece with his father because of political disagreements.

During this time, his younger brother, Alexander served as king. In 1920, he returned to Greece and his father reclaimed the throne. During that time, he served as one of the main generals in the war against Turkey. In 1922, the government forced his father to abdicate, so George became king.

The following year, the Greek Revolutionary Committee forced him to leave the country. In 1924, Greece officially became a republic and the government took away George’s title and citizenship.

After the government forced him out of the country, George moved to Bucharest, Romania. He lived there with his wife, Princess Elisabeth of Romania, whom he had married in 1921. He soon started spending a lot of time in London and the English countryside.

King George II, also often visited his mother in Florence, Italy. In 1932, he officially moved to London while his wife stayed in Bucharest. He began a relationship with Joyce Britain-Jones, an English socialite. He and his wife got a divorce in 1935.

During George’s exile, Greece suffered numerous coups and changes of government. In 1935, Prime Minister Georgios Kondylis forced the people to vote for the restoration of the monarchy. Soon after that, George returned to Greece and resumed his position as king. Over the next few years, he supported Prime Minister Ioannis Metaxas and his brutal regime.

Because of this, the people’s approval of George and the entire monarchy became much worse. In 1940, the Italian and German forces occupied a large part of Greece. The following year, Prime Minister Alexandros Koryzis committed suicide, making George the temporary head of the government. Soon after that, he and several members of the government fled Athens.

King George II, escaped from mainland Greece and went to the island of Crete. After the Germans attacked the island, he fled to Egypt and soon returned to London. Despite being in exile, he was still the official ruler of Greece. The British government advised him to create a more liberal constitution and gain the people’s support, but he refused.

Many politicians and royal family members were frustrated with him and his stubbornness. During this time, liberal groups and communist organizations were on the rise in the Greek government.

In 1945, he succumbed to the pressure from various European politicians and appointed Archbishop Damaskinos Papandreou as his regent. In 1946, the new monarchist government rigged the elections and voted for George’s return to Greece. Soon after that, he returned to Athens and resumed his reign.

King George II, died of coronary artery disease on April 1, 1947, at the age of 56. His funeral was held at the Metropolitan Cathedral of Athens and his remains were buried near the Tatoi Palace. Because he had no children, his younger brother, Paul, took over the Greek throne.