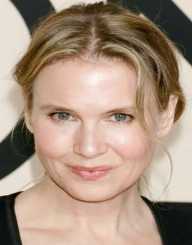 Renee Zellweger has made a name for herself in movies.

Renee Zellweger was born on April 25, 1969, in Katy, Texas. Her father was Swiss while her mother was Norwegian-born with many ties to Scandinavia. Growing up, Zellweger was identified more as a tomboy.

While in Katy High School, Renee Zellweger was active in cheerleading and gymnastics. She was also a member of the drama club and speech team. She graduated from University of Texas in 1991 with a degree in English.

Renee Zellweger worked her way through college as a waitress and taking on small acting jobs in commercials. Her drama class helped her along the way. After graduation, she played small roles in television and film from 1992 to 1994.

Her first significant role came in 1994 in Texas Chainsaw Massacre: The Next Generation. Her first leading role was in Love and a .45. By then she was on her way to major stardom.

Renee Zellweger's first movie appearance after moving to Los Angeles was in the 1994 film Empire Records. However, her breakthrough movie in which she was recognized worldwide as a star was co-starring Tom Cruise in Jerry Maguire.

The 1996 film did well in international block offices. Her next big productions came in 1998 with One True Thing and 2000 with Nurse Betty. She earned a Golden Globe Award for her role as Betty Sizemore.

Renee Zellweger continued with challenging roles in a variety of genres. One example is her role alongside Jim Carrey in the 2000 comedy Me, Myself, and Irene. She also starred as the iconic overweight, British character Bridget Jones in Bridget Jones' Diary. She returned to this role in two more sequels.

Renee Zellweger success continued both in box offices and award ceremonies. In 2002 she filmed White Oleander and co-starred in the musical film Chicago. In 2003, she portrayed Ruby Thewes in Cold Mountain.

Her singing and acting made way to two more Golden Globe Awards and one Oscar for Best Supporting Actress in Cold Mountain.

Renee Zellweger proved that she could be a voice actress as well. Some of her voice roles are in Shark Tale and Bee Movie. She continued to take on provocative starring roles in films like the 2005 Cinderella Man, Miss Potter, and Piece of My Heart as Janis Joplin.

The year 2008 was busy with films such as Leatherheads and Appaloosa.  Renee Zellweger was in more movies in 2009 with New in Town, My One and Only, and the psychological thriller Case 39. That same year Zellweger was the voice of Katie in Monsters vs. Aliens.

Renee Zellweger took some time away from movies from 2011 to 2015 only to return in 2016 with The Whole Truth and Bridget Jones' Baby. As of 2017, her next film Same Kind of Different as Me was in post-production.

Renee Zellweger supported a number of causes and charities. She has been associated with Stand Up to Cancer, The GREAT Initiative, and the Breast Health Institute

Renee Zellweger has been nominated for many awards in the United States and around the world. Some of the more notable awards she won include:

Hasty Pudding Woman of the Year, 2009