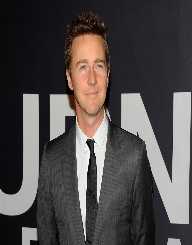 Edward Norton is an extremely talented Hollywood actor known for films like The Incredible Hulk and Primal Fear.

Edward Norton was born on August 18, 1969. His birthplace is Boston, Massachusetts and his star sign is Leo. Edward Norton was born in a rich family – his father Edward Sr. worked as a lawman, and his mother was a teacher. He is also the grandson of James Rouse – the famed real estate developer. Edward Norton started in acting early. He first played roles in theater in plays like Annie Get your Gun. He was extremely professional from childhood and amazed others by asking questions acting veterans do.

Edward Norton attended the University of Yale and studied astronomy there. He also had interest in history and Japanese. Throughout his education, he acted in various plays and received a lot of appreciation. He graduated in 1991 with a degree in history.

After finishing his education, Edward Norton went to Japan and worked for his grandfather’s company. He returned to the US in 1994 and began his acting career. Despite being from a privileged family, Norton moved up the ladder through struggles. Edward Norton worked as a waiter in his initial acting days. The first movie he appeared in was Primal Fear which came out in 1996. He won a Golden Globe Award for his role as a supporting actor in this film and also an Oscar nomination.

After Primal Fear, the doors to big film studios opened for Norton. He appeared in Skylar also starring Drew Barrymore and then was cast in a Woody Allen movie – Everyone Says I Love You. He also played the role of an attorney in The People vs. Larry Flynt.

Norton’s success in his early movies brought him more praise, and he was cast in Rounders alongside Matt Damon. The same year, he appeared in American History X earning another Oscar nomination. It was Fight Club in 1999 that truly established him as an accomplished actor in Hollywood worth every bit of fame he was showered with. His successful run continued till 2001 during which he appeared in Keeping the Faith and The Score. His career hit a rough patch in 2001 when his film Death to Smoochy flopped. However, he came back with a commercially successful film Red Dragon – from the Hannibal series. In 2003, Norton starred in The Italian Job, and two years later he appeared in the Kingdom of Heaven. Despite being a gifted actor, Norton has developed a reputation around himself – too difficult to work with! His acting is brilliant. However, he always has unique ideas about his character which may not resonate with the director.

In 2006, Edward Norton starred in the highly successful film The Illusionist. The movie that he is most known for came in 2008. He played the role of Hulk in The Incredible Hulk which became a box-office blockbuster. In the same year, he starred in Pride and Glory.  In 2014, he filmed The Grand Budapest Hotel and Birdman.

Edward Norton is known in the industry for being a perfectionist. Currently, he is busy lending his voice to the movie Isle of Dogs.

In the 1990s Edward Norton was in a relationship with Courtney Love. After it didn’t work out with Love, he dated Salma Hayek. Finally, he found the love of his life in Shauna Robertson – a film producer. They married in 2012 and had a child together.