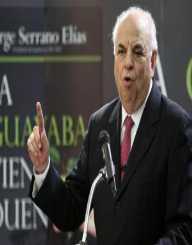 Jorge Serrano Elias was born on April 26, 1945, in Guatemala City, Guatemala. His parents were Rosa Elias and Jorge Adan Serrano. He also has three sisters.

For his high school education, Jorge Serrano Elias attended the Liceo Guatemala high school, which was in his hometown. After graduating from high school, he went onto attend the University of San Carlos, also in Guatemala. There, he earned a bachelor’s degree in engineering in 1967.  As a young adult, Serrano Elias attended Stanford University, in the United States. Here, he earned his doctorate.

As a youth, Serrano Elias’s family were devout Catholics, and so was he. After graduating from university, he was exposed to new religions. In 1975, Jorge Serrano Elias became a Protestant, converting to becoming an evangelical Baptist. This greatly changed his life. Because of his conversion, he also joined the Full Gospel Business Men’s Fellowship and the Pentecostal Church of the World.

Jorge Serrano Elias first ran for president of Guatemala in 1985. However, he did not win. He was instead appointed to work on the National Reconciliation Commission. He later ran for president again in 1990, winning this time. He was now set to have a five-year term.

In 1993, things started to get crazy in Guatemalan politics. At the beginning of the year, he signed the Guatemala Protocol, which reduced tariffs on trades with nearby countries. Later that same year, Jorge Serrano Elias caused the Guatemalan constitutional crisis.

During this time, Jorge Serrano Elias suspended the rights of the Guatemalan people written in the country’s constitution, did away with other large governing bodies (like the Guatemalan Supreme Court), and rigorously made new censorship rules. Quickly afterward, he named himself the dictator of Guatemala. This did not last long. Both the public and the military worked against him, forming a coup. Later the same year, he resigned and left his post as both dictator and president. He then moved to Panama with his family. His vice president, Gustavo Espina, replaced him.