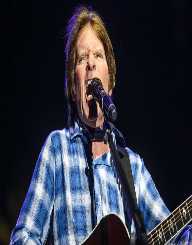 John Cameron Fogerty was born 28th May 1945, to Galen and Edith Fogerty. He was born in Berkeley, California, in the United States, and he had four brothers.

John Cameron Fogerty studied at St. Mary’s High School, and then transferred to El Cerrito High School. While he was at El Cerrito, he met the other members of the group that would become Creedence Clearwater Revival. His older brother, Tom, would also become a member of the group.

The band originally formed in 1959 as a cover band, called Blue Velvets. Fogerty’s brother, Tom, joined the group in 1964. The band signed a contract with Fantasy Records, and the record label changed the name of the band to the Golliwogs. They recorded several singles, but they had no success.

John Cameron Fogerty served in the military during 1966 and 1967. After he was discharged from the army in 1967, he went back to the band, and they changed their name to Creedence Clearwater Revival. Their debut album was released in 1968, and they had their first hit single, Susie Q. It didn’t take very long for dissension to enter. John Cameron Fogerty felt he should have a major say on the direction of the band, as he was the lead singer, lead guitarist, and he also wrote most of the songs. This caused resentment among his fellow band-members.

Between 1967 and 1972, the band had great success. They had seven studio albums, all of which either went platinum, gold, or both. They had 29 singles, two live albums, and 41 compilation albums. In 1972, John Cameron Fogerty embarked on a solo career. His first solo album, called John Fogerty, was released in 1975.

John Cameron Fogerty then took a break from the industry for a few years. In 1985, he made a comeback with an album called Centerfield, which went to the top of the charts. That same year, Fogertyfilmed a one-hour special called John Fogerty’s All-Stars which was shown on Showtime.

In 1990, John Cameron Fogerty traveled to Mississippi, in the hope of finding inspiration. He got some insights while traveling, and soon after began to record a new album. He also began to perform his Creedence Clearwater Revival material on a regular basis. John Cameron Fogerty continued to record and release his music, and he stepped up his touring schedule as well. Between 2004 and 2009 he performed all over the world in a concert tour.

From 1973 to 2013, John Cameron Fogerty released nine albums. In September 2017, he signed a recording contract with BMG Rights Management.

Among his awards, John Cameron Fogerty has the following:

2005:   Inducted into the Songwriters Hall of Fame

In 1965, John Cameron Fogerty married Martha Paiz. They had three children together, but they divorced in the 1970s.

Fogerty’s second marriage was to Julie Kramer in 1991. Kramer had a child from her previous marriage, but she had three more children with Fogerty.