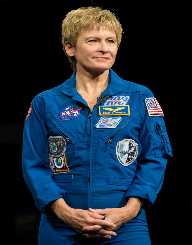 Peggy Whitson was born on the 9 February 1960 in Mount Ayr, Iowa to Beth and Keith Whitson. She has one sibling, a sister Kathy. The family were farmers, and their daughters were raised on the farm, helping out with farm work.

Peggy Whitson attended Mount Ayr Community High School, graduating in 1978. She was a gifted student and in 1978 was awarded an Academic Excellence Award. In 1980 she won an Orange van Calhoun Scholarship.

She studied at Iowa Wesleyan College, graduating in 1981 with a B.Sc. and then went on to Rice University in Houston to do her masters in biochemistry. In 1984 she was awarded her PhD. and became a postdoctoral fellow.

Peggy Whitson started working at the Johnson Space Centre in Houston in 1986. In 1988, she was appointed a supervisor of the Biochemistry Research Group at KRUG International and stayed there until September 1989, moving to the Biomedical Operators Research Branch at NASA JSC.

From 1992 until 1995 she was appointed the project scientist on the Mir-Shuttle Program. She was the Deputy Division Chief of the Medical Sciences Division at NASA-JSC while at the same time between 1995 1996, she was the co-chair of the US-Russian Mission Science Working Group.

Peggy Whitson was chosen as an astronaut candidate in 1996, and her training commenced the same year. She became a qualified flight specialist in 1998. In June 2002 Peggy Whitsonn was on the space shuttle Endeavour, Expedition 5 as a flight engineer and spent 184 days in space. She was Deputy Chief of NASA Astronaut Office (November 2003 until March 2005). Then from May 2005 until November 2005, she was Chief of the Station Operations Branch: Astronaut Office. Her second space flight was on Soyuz-TMA 11 in October 2007. She was commander of the Expedition 16 mission into space and spent 192 before turning to Earth on Soyuz-TMA 11 in April 2008. Peggy Whitson became the first non-military person to became chief of the Astronaut Office (2009-2012).

Peggy Whitson was named the commander of Expedition 51 which launched in November 2016. She broke the record for time spent in space by a US astronaut. Williams set the previous record: 534 days. President Donald Trump phoned Whitson to congratulate her on the historic event.

NASA awarded Peggy Whitson the Exception Service Medal in 1995 and 2004. She went on to win a third time in 2006 and also picked up the NASA Outstanding Leadership Medal the same year. The Russian Government presented her with the Medal for Merit in Space Exploration in April 2011.

Her hobbies include basketball, biking, water-skiing, and weightlifting.

Peggy Whitson broke the record of accumulative time spent in space for a United States astronaut. At 55, she also became the oldest woman to have gone on a space flight. She was also the first non-military person to hold the office of Chief Astronaut.