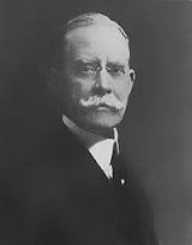 John Henry Patterson was notably the founder and owner of National Cash Register Company (NCR). His outstanding intervention in the great Dayton Flood of 1913 and the resulting development of the Miami Conservancy district sets him aside as one of the great pioneers and heroes of the present-day United States.

This great businessman, John Patterson, was born into the family of Jefferson and Julia Patterson on 13th December 1844, in the family farm in Dayton, Ohio. His father, Jefferson Patterson was the youngest son of Colonel Robert Patterson who fought under George Washington. Julia Johnston, his mom, was the daughter of Colonel John Johnston, Indian agent of the United States government. His father owned a sawmill where John Patterson worked for most of his childhood alongside the Rubicon farm owned by his family.

After his high school, John Patterson went to Miami University, Oxford Ohio, and then attended the Dartmouth college to further his education and graduated in 1867. He took teaching jobs during college vacations to cover his college expenses. In 1864, he served in the Union army for 100 days as a voluntary duty, in honor of the appeal made by President Lincoln for volunteers to serve the country. He got enlisted in the 131st O.V.I and was discharged on 25th August 1864, after which he returned to the Miami University.

In 1882, John Patterson became an investor in the National Manufacturing Company, which later became the National Cash Register Company (NCR) after he bought it with his brother (His business partner in the coal business) in 1884. By age 40, Patterson became the owner of the NCR, a dramatically transformed version of former James Ritty owned cash register manufacturing company. About ten years after, he built the first daylight factory.

As a businessman and salesperson, he instituted the first sales training school in the world, situated within the National Cash Register factory campus at Sugar Camp, Dayton Ohio. His business watchword was always; “we cannot afford to have a single dissatisfied customer," and this was posted in every service department of his company. It is said that mist businessmen trained by Patterson went on to become prominent business achievers. The likes of Thomas Watson, a former employee at NCR, who became president of CTR, later renamed IBM. The role Patterson played in the Dayton flood would later earn him and Watson pardon later on from President Woodrow Wilson after being arrested for unfair business practices.

John Patterson was a perfectionist at heart, to the point that he fired his employees for the most trivial of reasons. There were also speculations that he made his employees adopt most of his health routines. This earned him the title of one of the worst bosses in history. He is often referred to as the father of professional selling due to his numerous contributions to the modern day sales pitch and sales strategies including marketing, direct mail, print advertising, customer testimonials, and publicity.

He made a revolutionary change in the world of selling and business. Patterson devised the modern day practice of including testimonies of satisfied customers to advertising and marketing to sway prospective customers and that strategy has proven to be one of the most marketable in the business routine and is still practiced till date. He had a mind-blowing concept of selling a need and not a product. His ideas significantly boosted the sales of cash registers from the initial four hundred that had been sold under former owner, James Ritty.

John Patterson married Katherine Beck of Brookline, Massachusetts in 1888 when he was 44 years old. She died six years later of Diphtheria. She gave him two children, Frederick Beck Patterson, and Dorothy Patterson. He spent his adult life in Oakwood, Montgomery County, Ohio living in his Swiss Chalet estate. He also owned an estate in Beaver Lake, East of Lowville where his family also owned two other estates.

John Patterson died on May 7, 1922, at the age of 78, before he could fulfill his vision of developing a center for aviation research in Dayton. He was buried in Woodland Cemetery, Dayton. Ohio. His company was inherited by his son, Frederick Patterson.