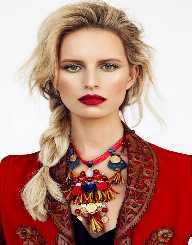 Karolina Kurkova is best known as a lingerie model. More recently she has been working on her career as an actress.

Karolina Kurkova was born on February 28, 1984, in D??ín, Czechoslovakia. Her father was a Czech basketball player. She was also a tall child and was often made fun of.

A friend of Kurkova's sent her photo to a Prague modeling agency. Her discovery led to modeling jobs and runway appearances by the age of 15.

Karolina Kurkova got her first modeling contract in Milan. By 1999, she was in American magazines. In 2001, she made her first cover at the age of 17. This made her the youngest cover model in the magazine's history.

Victoria's Secret made her even more famous. She walked the runway during their fashion show nine times and stayed with them until she was 27.

Karolina Kurkova started looking to acting as well as modeling. She has appeared on television shows as herself and in various roles. Some shows include Chuck, 30 Rock, and Person of Interest.

Karolina Kurkova has been a judge on Next Top Model for both the United States and Germany. Kurkova has also been a supermodel coach for The Face on the Oxygen network. Her first film was My Sexiest Year in 2007.  She was also in G.I. Joe: The Rise of Cobra in 2009.

Karolina Kurkova still graces the covers of fashion magazines all over the world.

Karolina Kurkova supports organizations such as “The Beautiful Life Fund,” “Global Youth Action Network,” and “Free Arts.” She focuses on the welfare of children.

Received award from “Women Together,” 2006

Receives a star on the Hollywood Walk of Fame, 2007

“Style Icon” at the Vienna Awards for Fashion and Lifestyle, 2012

Karolina Kurkova suffers from hypothyroidism. This has been attributed to her weight gain and symptoms of premature menopause.

Karolina Kurkova is a fan of basketball. Her father is a basketball player, and she enjoys courtside games at Madison Square Garden.