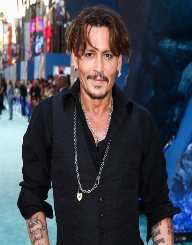 John Christopher Depp II was born in Owensboro, Kentucky. He was the youngest child in a family of four children. His mother was a waitress, but his father- a civil engineer. During his childhood, the family often had to move, but in 1970, they finally settled in Miramar, Florida. When he was 15 years old, Depp’s parents separated.

From early childhood, Depp was interested in music. His mother gave him a guitar when he was 12 years old. He played in various garage bands, but after his parent’s divorce, he dropped out of school to become a rock star. After two weeks, he tried to go back to school, but it was the school’s principal who told him to follow his dream. He started to play in a band called The Kids, which had moderate success. In 1983 he married the sister of the band’s bass player Lori Anne Allison, who worked various jobs, including as a make-up artist. She introduced him to Nicholas Cage, who advised Depp to choose an acting career.

Nicholas Cage introduced Depp to an agent, and he landed several small roles in Hollywood. His first movie role was in the horror film Nightmare on Elm Street in 1984. Depp started to study acting and took classes at the Loft Studio in Los Angeles. His hard work paid off, and Depp landed a role on the 1987 TV series 21 Jump Street. He played an undercover cop Tommy Hanson, a role, which immediately brought Depp to star status. The show ran until 1989, and Depp went on to pursue bigger roles.

In 1990, Depp changed his teen idol status with a role in the musical Cry-Baby. The film became a cult hit. The same year he shoved his acting versatility in Tim Burton’s film Edward Scissorhands. The project established Depp as an A-list actor and presented him as a serious and surprising actor.

Depp was succeeding as an actor, but his private life was going out of control. He co-owned The Viper Club in L.A., which was the hippest spot in the city. On October 31, 1993, the critically acclaimed actor River Phoenix died of a drug overdose outside the club. Depp himself had a drug problem, and at the time he also had a very public and destructive relationship with British model Kate Moss. Despite his troubles, his career was still on the rise. During this time, he starred in Burton’s 1994 film Ed Wood, for which he was nominated for a Golden Globe, as well as 1997 film Donnie Brasco.

1999 was a busy year for Depp since he starred in the sci-fi horror film The Astronaut’s Wife and Burton’s project Sleepy Hollow. The following year, Depp appeared on the famous drama film Chocolat. His first two major blockbusters were 2001’s Blow and Robert Rodriguez’s Once Upon a Time in Mexico in 2002.

Depp won his first Academy Award nomination for his performance in the major box office hit The Pirates of the Caribbean. The film was extremely successful and led to a creation of a franchise. The same year he also starred as Peter Pan creator J.M. Barrie in Finding Neverland. The role won him numerous award nominations, including both Academy and Golden Globe awards.

Depp continued to team up with Tim Burton on several projects. In 2007 he co-starred with Helena Bonham Carter in the Sweeney Todd: The Demon Barber of Fleet Street. In 2010, he starred in the blockbuster Alice in Wonderland, which grossed more than $116 million on its opening weekend and in 2016 he starred in the sequel of the film Through The Looking Glass.

Depp divorced from his first wife in 1985. He also dated his Edward Scissorhands co-star Winona Ryder and proposed to her. Depp had a tattoo “Winona forever” on his arm. The couple split after her parents forbid her to marry. While filming the 1999 film The Ninth Grade, Depp met French actress Vanessa Paradis. She became pregnant the same year and gave birth to their daughter Lily-Rose Melody. Three years later, the couple had their son Jack John Christopher Depp III. In 2007, Depp’s daughter suffered from a serious E.Coli infection which resulted in kidney failure. She recovered at the Great Ormond Street Hospital in London. To show his gratitude, Depp showed up in the hospital dressed as Captain Jack Sparrow and spent several hours entertaining the children. He also donated $1 million to the hospital. The couple broke up in 2012.