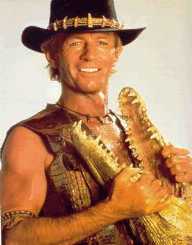 Paul Hogan was born on October 8, 1939. He is an Australian actor and television presenter. He is also a comedian.

Paul Hogan was born on October 8, 1939, in New South Wales, Australia. He had a job as a rigger on the Sydney Harbour Bridge.

In 1971, Paul Hogan made his debut television appearance in the talent show ‘New Faces.’ He was a comedic performer, and so he ended up capturing the attention of Mike Willesee who is a host of the program ‘A Current Affair.’ He also made friends with the producer of ‘A Current Affair,’ John Cornell. John later became Paul’s manager and business partner. He established his comedy sketch program ‘The Paul Hogan Show.’ He produced and wrote the show. The series ran from 1973 to 1984. In 1973, he won the Television Week Logie Award for Best New Talent.

In 1985, he starred as Pat Cleary in the miniseries ‘Anzacs’ which included actors such as Robert Coleby, Bill Kerr, Ilona Rogers and Megan Williams among others. In 1986, he appeared in the film ‘Crocodile’ as Dundee. He also co-wrote the picture. In 1987, he won the Golden Globe Award for Best Actor – Motion Picture Musical or Comedy. In the same year, he also co-hosted the ‘59th Academy Awards’. In 1988, he reprised his role in ‘Crocodile Dundee II.’ In 1990, he made and starred in the movie ‘Almost an Angel’.

In 1986, Paul Hogan was appointed as Member of the Order of Australia.

In 1958, Paul Hogan married his first wife, Noelene Edwards. In 1981, they divorced. In 1990, he married an actress, Linda Kozlowski. He has six children, five with his first wife and one with Linda. In 2013, Linda filed for divorce on the grounds of irreconcilable differences. He is currently seventy-eight years old.