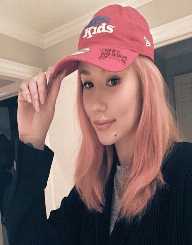 Iggy Azalea is a female hip-hop rapper native from Australia. She moved to America to pursue her dreams as a musician in the genre of hip-hop and urban music. This blonde Australian even rose to greater fame when she collaborated with Charli XCX for the chart-topping hit song "Fancy."

Iggy Azalea got her name from the name of her childhood pet, Ignatius from which she derived "Iggy" from and "Azalea" from the street where her she and her parents lived.

The Australian Native With Big Dreams

The child of Brendan and Tanya Kelly, her real name is Amethyst Amelia Kelly. Azalea was born on June 7, 1990, in Sydney Australia. Her father worked as an illustrator of children's book while her mother worked as a cleaner. She was brought up in Mullumbimby, on the town in New South Wales. Growing up, she has already involved in the arts thanks to the influence of her artist father, which spanned her work as well.

Iggy Azalea got into hip-hop at the age of 12 and started rapping by the age of 14. In later interviews, Azalea shared that Busta Rhymes, Missy Elliot, and Tupac were her favorite artists that greatly influenced her to pursue being a rapper in the music industry.


The Decision Of A Lifetime

Iggy Azalea also admitted that she never felt at home in Australia hence she wanted to move to the birthplace of hip-hop: America. In 2006, Azalea and family went for a short trip in the States further strengthening the young Azalea's plan to move there.

Determined to be a rapper, she dropped out of high school and cleaned houses alongside her mom to save money.

A little short before her 16th birthday, she went on a trip to America instead of going on a holiday with a friend. Upon arrival though, she called her parents telling them she'll never come home.

While in America, she constantly moved from different States: from Miami to Houston, then Atlanta and Los Angeles. While staying in Los Angeles, she got connected to a representative from Interscope records and got to release her first mixtape entitled "Ignorant Art" back in 2011 which included her song "Pu$$y." The track garnered attention improving Azalea's presence in the industry as a rapper.

Azalea's breakthrough success came when in the form of her album debut album that came out in April 2014 entitled The New Classic. She collaborated with other famous acts for the said album namely Rita Ora, Ariana Grande and British sensation Charli XCX. The album yielded chart-topping tracks such as "Black Widow," "Work," Bounce," and "Change Your Life." Her collaboration with Charli XCX on the song "Fancy" snagged the top position in the Billboard Hot 100 Singles followed closely by her other song, entitled "Problem" with Ariana Grande.

Going Under The Knife

Iggy Azalea has openly revealed to the public that she had undergone surgery a couple of times. She admitted to breast enlargement and having a nose job. She initially kept mum about the subject because she doesn't want other girls to be uncomfortable about their bodies. Eventually, she openly talked about it because didn't like keeping secrets

Back in 2011, Iggy Azalea went out with fellow rapper A$AP Rocky, even tattooing the tile of Rocky's album "Live. Love. A$AP." on her fingers and removed it the following year after the couple's split. In June 2015, Iggy Azalea was set to marry L.A. Lakers' Nick Young, but the pair ultimately split a year later.

In 2012, Iggy Azalea got listed on American hip-hop magazine XXL in the annual Top 10 Freshman as the only international female rapper. She has also included the BET Hip Hop Awards Rap Cypher of the same year.