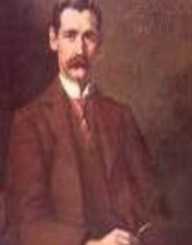 Henry Archibald Hertzberg Lawson is even now hailed as ‘Australia’s Greatest Writer’ and is well-known for his short stories and poems depicting Australian rural life. His short story, ‘The Drover’s Wife,’ and the poem, ‘Past Carin’ are very famous.

Though he was honoured with a state funeral after his death, he died a poor man.

Henry Lawson was born on June 17, 1867, to Neils Hertzberg Lawson and Louisa in Grenfell, New South Wales. Neils Lawson was a gold miner from Norway, and most of the time he was away from home. Louisa was interested in writing and publishing. Lawson began his education at Erunderee, New South Wales on October 2, 1876.

He became partially deaf due to an ear infection in his childhood and lost his hearing by the age of fourteen. His teacher, John Tierney was kind enough to help him with studies. Henry enrolled himself in a school in Mudgee, New South Wales and his new teacher Mr. Kevan was instrumental in inspiring him to take up poetry.

Henry Lawson was keen on reading and was influenced by English writers such as Charles Dickens and Frederick Marryat. The marriage of his parents broke up and his mother, Louisa started staying in Sydney with other children. Henry joined his mother and to support his mother, he went for work in the morning and studied during the night. However, he could not get through his matriculation examination.

Henry Lawson's first piece of literature was the poem, ‘A Song of the Republic’ and it was published in ‘The Bulletin’ on October 1, 1887. Same time he came out with a couple of poems titled ‘Golden Gully’ and ‘The Wreck of the Derry Castle’.

Henry started writing for his mother’s newspaper ‘The Republican’ regularly. He established himself as a poet by publishing a number of poems such as ‘Faces in the Street’ and ‘Andy’s Gone with Cattle’ over the next three years.

In 1891, Lawson worked as a journalist for ‘Boomerang’ for about eight months. He was an editor for the Brisbane newspaper, ‘The Worker’ started by a journalist, William Lane. Meanwhile, he continued to publish his poems in ‘The Bulletin.’ The journal awarded him sponsorship to New South Wales, and he started working in the oil field of Toorale Station in 1892.

On July 9, 1892, Henry Lawson published a poem, ‘Up the Country’ describing the arid New South Wales. A lively poetic debate followed with a retort from a renowned poet Banjo Paterson who came out with ‘In Defence of the Bush’.

His mother helped him publish his first collection, ‘Short Stories in Prose and Verse’ in 1894. In 1896, he published ‘While the Billy Boils,’ a collection of his works of prose and ‘In the Days When the World Was Wide,’ a collection of poems. The books were published as a part of a book contract with Angus and Robertson.

Henry Lawson also was famous for his ‘sketch stories’ with a very thin plot, and a good example of this type was his book, ‘On the Edge of a Plain.’ In 1900, Henry went with his family to become a literary celebrity in London, England. Though the stay was a professional disaster, he came out with four masterpieces with the lead character, Joe Wilson.

In 1902, he returned to Sydney along with his family. The prolific writer published many short stories such as ‘A child in the Dark, and a Foreign Father,’ Over the Sliprails,’ ‘On the Track,’ The Loaded Dog’ between 1900 and 1902. He also brought out collections of poems like ‘My Army, O, My Army and Other Songs,’ ‘Verses, Popular and Humorous’.

In 1903, Henry Lawson plunged into a financial mess and was forced to reside in a room in ‘Coffee Palace’ in North Sydney owned by Mrs. Isabel Byers. She helped him to survive and was also responsible for publishing his poems and stories. Lawson’s books such as ‘Send Round the Hat,’ ‘Joe Wilson,’ ‘The Romance of the Swag’ and ‘When I was King’ saw the print between 1904 and 1908.

Henry was forced to spend some time in the prison, Darlinghurst Gaol, due to alcoholism and for his inability to pay maintenance to his child. This inspired him to write a poem, ‘One Hundred and Three’ in 1908, which described his life as a prisoner. Between 1909 and 1919, Henry published many books including ‘For Australia and Other Poems,’ ‘The Skyline Riders and Other Verses’.

Henry Lawson married Bertha Bredt Jr. In 1896 and the couple had two children, Joseph and Bertha. The marriage was not a happy one and lasted for a short time. His old age was miserable due to financial bankruptcy and alcoholism. His landlady, Mrs. Isabel Byers supported him fully in his old age, and Henry died of cerebral hemorrhage on September 2, 1922, in Abbotsford, Sydney in her house.

Henry Lawson's short story, ‘The Drover’s Wife’ is famous for depicting human emotions, particularly solitude. The story has been widely adopted by the screen, and the theatre, and also is a part of the syllabus of a number of schools.

Henry Lawson was honoured with a state funeral in the presence of the Prime Minister, Billy Hughes and a large number of citizens. His body found the last refuge in ‘Waverley Cemetery’ in Bronte, Sydney.

In 1927, a bronze statue of Henry Lawson was installed by the Henry Lawson Memorial committee in the open space called ‘The Domain’ in Sydney. In 1949, he was commemorated with a postage stamp of Australia. In 1966, the ten dollar note of Australia carried his portrait.