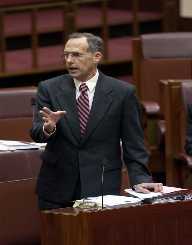 Bob Brown is one of the most famous Australian Politician who acquired International acclaim for his active role in the local environmental movement. Having founded the Tasmanian Wilderness Society as well as spending 19 days in jail for leading a 2500-man four-month-long demonstration in a fight against environmental degradation, Bob Brown is, undisputedly, one of the most active environmentalists of the present times.

Bob Brown was born Robert James on 27th December 1944 in Oberon, New South Wales, Australia, and was one of his parents’ twin children.  His star sign is Capricorn.

Bob Brown was enrolled in Trunkey Public School where he undertook his early education before proceeding to Coffs Harbour High School in 1957. In 1960, Bob Brown joined Blacktown Boys’ High School where he also served as the school captain. After successful completion of his high school education, he enrolled at the University of Sydney where he studied and finally obtained his Bachelor of Medicine and Surgery degree.

Having graduated from the University, Bob Brown was employed as a medical practitioner at the Royal Canberra Hospital. Later, He worked at Darwin & Alice Spring’s Hospital both as a resident doctor. In 1970, Bob Brown went to London where he first worked at Hounslow Cottage Hospital before moving to St. Mary Abbot’s Hospital, South Kensington both as a resident doctor. In 1972, he moved to Tasmania where he worked as a general practitioner and was based in Launceston.

In the seventies, Bob Brown got involved in the country’s environmental movement that worked towards saving Lake Pedder. Bob Brown also became a member of United Tasmania Group, a newly formed Australia’s first green party the same year. In 1976, Bob surprised many people when he stayed on top of Mount Wellington for one week without food to protest against the entry of the nuclear-powered Warship at Hobart. Two years later, Bob Brown was made the director of the Tasmanian Wilderness Society. Later he led the campaign against the construction of Franklin Dam (a part of hydroelectricity project) because it would have drowned River Franklin.

This led to his arrest (together with other 1,499 people), and he spent 19 days in prison. Upon his release, Bob Brown became the Tasmanian’s Member of Parliament taking the position held by Norm Sanders (a Democrat MP) who had resigned to vie for Australian Senate. Due to his earlier protest, together with the intervention by the Federal Government, River Franklin was finally protected in 1983. Bob Brown introduced various private members’ initiatives including gay law reforms, death with dignity, lowering parliamentary salaries, among others.

As A Member Of The Parliament

After an excellent job in the House of Assembly, he resigned and tried his luck for a chance in the House of Representatives in 1993. He, however, never succeeded. In 1996, Bob Brown was elected Tasmania’s Senator. Bob Brown was very outspoken and led a led a strong opposition to the conservative government led by John Howard. During this time, Bob Brown strongly supported Forrest protection, human rights issues, and International issues like West Papua, Tibet, among others. Due to his excellent performance, he was re-elected to the Senate in the year 2001. Bob Brown strongly opposed the participation of Australian in the 2003 invasion of Iraq. He was again re-elected in the 2007 federal election along with the new Labor Government. In the year 2012, Bob Brown resigned from the leadership of Greens.

Bob Brown also announced his soon-to-be resignation from the Senate later the same year once his suitable successor was found. Peter Whish-Wilson later replaced him in the Senate on 15th June 2012. In 2013, he worked as the director of the Australian Chapter of Sea Shepherd Conservation Society, a position he held for a year eventually stepping down in 2014.

In 1983, Bob Brown was named the Australian of the year by the Australian newspaper before receiving the IUCN Packard Award a year later. In 1990, Brown received both the Goldman Environmental Prize and the MAPW Distinguished Physician Award. He was, later in 1996, named the world’s most inspiring politician by the BBC Wildlife Magazine.

Bob Brown did also receive many other awards including EnvironmentalHero (2006), Australian Peace Prize (2009), Australian Humanist of the year (2010), among others.

Bob Brown was never married and had no children. Bob Brown openly admitted that he had a gay partner (during a newspaper interview in 1976).

During that time, homosexuality was a crime in Tasmania. Today, Bob Brown together with Paul Thomas, his long-time partner lives in Cygnet, Tasmania. Thomas is an activist, and a farmer and the two met in 1996.