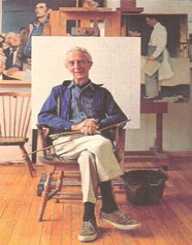 Norman Rockwell was an American author and illustrator best known for his cover illustrations in The Saturday Evening Post and the Rosie the Riveter war poster.

Norman Rockwell was born in New York on 3, February 1894. Rockwell’s father, Jarvis Rockwell, worked as the manager of a textile firm. His mother was Anne Rockwell née Hill. Rockwell had an older brother named Jarvis. From an early age, Rockwell was interested in art and attended the Chase Art School. He also studied at the National Academy of Design and the Art Students League.

While still studying, Norman Rockwell had a number of his illustrations published by the Boy’s Scouts magazine and upon graduation was hired by Boy’s Life as an illustrator. He was promoted to art editor for the magazine. In 1916, Rockwell had the first of his paintings published by the Saturday Evening Post, Mother’s Day Off. After this initial success, Rockwell had one of his works published every one of the remaining months of 1916.

Rockwell would be published 326 times by the Saturday Evening Post. His success brought him interest from other publications and Rockwell would be released by Life Magazine, Literary Digest, and many others. Rockwell was initially deemed to join the army but was later accepted as a military artist.

During World War II Rockwell painted the Four Freedoms series which was based on a speech by then-president Franklin Delano Roosevelt. The series was used to promote the sale of U.S government war bonds. The set consisted of Roosevelt’s four freedoms, Freedom from Want, Freedom from Fear, Freedom of Speech and Freedom of Worship.

In 1963 Rockwell ended his association with Saturday Evening Post and began work for Look magazine. Rockwell’s work for Look focussed more on space exploration and civil rights, both of which were significant news stories at the time. Rockwell painted the portraits of four American presidents, Eisenhower, Kennedy, Johnson, and Nixon.

Rockwell also included Egypt’s Gamal Abdel Nasser and India’s Jawaharlal Nehru amongst his portrait subjects. In 1978, Rockwell completed his last commission for the Boy Scouts at the age of 82. Rockwell died of emphysema. He died on 8, November 1978.

Norman Rockwell received the Presidential Medal of Freedom in 1977 from Gerald Ford.

Norman Rockwell was married three times. Rockwell married Irene O’Connor in 1916, and they divorced in 1930. Rockwell met his second wife, Mary Barstow. They married in 1930 and moved to New York. Together they had three children, Jarvis, Thomas, and Peter. Their marriage ended in 1959 when Mary died of a heart attack. Rockwell married for the third time in 1961. His third wife Mary Punderson was a retired school teacher.

Norman Rockwell was dismissed as an artist for most of his career as his subject matter was seen as too quaint to be taken seriously. Some critics who recognized his talent mourned his choice of subject matter. It was only when he began working with Look Magazine and depicting political art that his ability was appreciated.