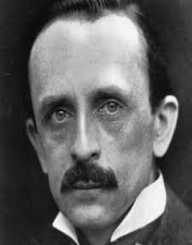 Scottish author and playwright James Matthew Barrie was born on May 9, 1860, in Kirriemuir, Angus, Scotland. He was the seventh of his parents’ eight surviving children. Two of his older siblings died before his birth. His father David Barrie was a reasonably successful weaver. He received his elementary education at the Glasgow Academy where two of his oldest siblings were working as teachers. After attending the Academy for two years, he returned home and resumed his education at the nearby Forfar Academy at the age of ten.

At age 14, he again moved out to Dumfries in South West Scotland to attend the Dumfries Academy to pursue his secondary education. Later, he enrolled at the University of Edinburgh and secured his Master degree in literature in 1882. During the period of his study at the university, he worked as a drama reviewer for the Edinburgh Evening Courant.

J. M. Barrie was passionate about pursuing a career in literature. However, his family wanted him to seek a somewhat professional career like ministry. To placate his family, he agreed to study at the university level. He, however, chose literature as his subject. Upon his graduation, he served the Nottingham Journal as their staff journalist for one and a half years.

Soon, he wrote a series of stories containing his mother’s reminiscences about Kirriemuir and published these stories in St. James’s Gazette, London. The series of stories thus published include three of his most famous works; ‘Auld Licht Idylls’ (1888), 'A Window in Thrums' (1890) and 'The Little Minister' (1891).

All these literary works continued to explore life-based on the remembrances of his mother involving their home town of Kirriemuir. The Little Minister is full of emotional content and became highly successful as well as a best-seller. Barrie dramatized the novel in 1897 and mostly concentrated on writing plays for theatres after that.

The success of J. M. Barrie's ‘Auld Licht’ series of story prompted him to self-publish his first full-fledged novel ‘Better Dead’ (1888). He further wrote some highly fictional works including ‘When a Man’s Single’ (1888) and ‘Sentimental Tommy’ (1896). Both novels are set on the backdrop of Kirriemuir (mentioned as ‘Thrums’) and displayed fictional romanticism between the protagonist and the reality.

Upon his moderately successful start as a fiction writer, J. M. Barrie concentrated on writing plays in 1890. He wrote a comedy titled ‘Walker, London’ (1892), where he took on the institution of marriage sarcastically, mocking, and ridiculing the same. The audience well received the comedy. At the very beginning of the 20th century, he authored two consecutive highly successful dramas; ‘Quality Street’ (1901) and ‘The Admirable Crichton’ (1902).

The first one is a hilarious comedy about a decent, mature spinster trying to grab the attention of her war-returned one-time suitor in the guise of her seductive niece. The second one is about an aristocratic family and their domestic servants whose social hierarchy was reversed comically after they got marooned on a desolate island post a shipwreck. He further made a prosperous career as a playwright.

J. M. Barrie is best known for his invention of the character of Peter Pan. The character made its first appearance in 1902 in the novel ‘The Little White Bird.’ He followed it with his more famous and persistent work 'Peter Pan; or, The Boy Who Wouldn't Grow Up.' The play was first performed on stage on December 27, 1904. With this the famous female character of the Peter Pan series, Wendy was introduced to the audience.

Barrie received the idea and inspiration for creating his magnum opus character of Peter Pan when he met the five Llewelyn Davies brothers during the conclusion of the nineteenth century. It was during those days when he went for long walks in London’s Kensington Gardens to relieve his stress arising out of a troublesome marital life.

J. M. Barrie later discovered Sylvia Llewellyn Davies, mother of the Llewelyn Davies brothers during an 1897 New Year’s Eve dinner. He soon mingled with them and became a benevolent member of their family, extending financial support as and when required. In 1911, he converted the Peter Pan drama into a novel and renamed it as ‘Peter and Wendy’.

J. M. Barrie married actress Mary Ansell on July 9, 1894. The marriage reportedly remained a failure, and the couple remained childless. The couple divorced in October 1909 after Barrie sued her on the grounds of infidelity. He passed away on June 19, 1937, on account of pneumonia. His mortal remains were buried at Kirriemuir beside the burial site of his parents and two of his elder siblings.