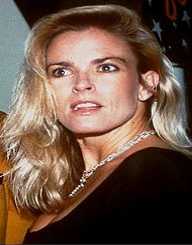 Born on May 1959, Nicole Brown Simpson was the Wife of actor and retired professional NFL player, O. J Simpson. Simpson who was a German-American was murdered in cold blood by multiple stabbing on June 13, 1994, in Brentwood, Los Angeles, California. She was killed along with her friend, Ron Goldman, a 25-year old waiter. O. J Simpson was accused of the crime, arrested, and subsequently charged with murder but was acquitted in 1995. However, a civil suit filed in 1997, found him liable for the death and asked to pay compensatory damages of $33.5 million to the families of Nicole and Goldman.

Nicole Brown Simpson was born to Juditha Anne Brown (née Baur; 1931) and Louis Hezekiel Brown on May 19, 1959, in Frankfurt, West Germany. Louis was working as a correspondent for the American armed forces publication Stars and Stripes in Frankfurt when he met Juditha. The family moved to the United States to settle in Garden Grove, California, while Nicole Brown Simpson was a toddler. She was the second daughter of four by her parents. Her siblings are Denise, Dominique, and Tanya. She received education from Rancho Alamitos High School in Garden Grove, California and later moved to Dana Hills High School, where she was named homecoming princess.

In 1977 at age 18, Nicole Brown Simpson was working as a waitress in a private club, The Daisy at Beverly Hills where she met O. J Simpson. The two started dating despite Simpson being married to Marguerite. In 1979, Simpson finally had a divorce from his wife. He went on to marry Nicole on February 2, 1985, at his home in the tony Los Angeles neighbourhood of Brentwood. That same year, the couple had a daughter Sydney and their second child Justin, followed three years later.

Nicole’s marriage was nothing near comfort as the former NFL player who was an unfaithful husband constantly abused her. According to family and friends accounts, they used to see bruises on Nicole’s body. Simpson was also used to threaten her with death allegedly. In 1989, he pleaded no contest to spousal abuse. Getting fedup with the series of abuse, Nicole filed for a divorce in 1992, with reasons being irreconcilable differences.

Nicole Brown Simpson finally had a divorce from Simpson with a settlement of $433,000 and a child support of $10,000 a month. Simpson was not satisfied with the divorce and was used to stalking Nicole everywhere she went. She is reported to have told her mother: “I go to the gas station, he's there. I'm driving, and he's behind me."

In the early morning of June 13, 1994, Nicole Brown Simpson was found dead in a pool of blood with multiple stabs outside her 875 South Bundy Drive, Brentwood, Los Angeles home. Along with her was the waiter, Ron Goldman. According to autopsy results, she was stabbed seven times in the neck and scalp. He also had a 5.5 inches cut across her throat and had defensive wounds on the hands.

Nicole Brown Simpson was buried at the Ascension Cemetery in Lake Forest, California. Simpson was arrested and prosecuted for the murders. He was acquitted in a criminal trial in 1995. However, a court found him liable for the death in a civil suit filed by the two families in 1997. He was asked to pay $8.5 million in compensatory damages to Goldman’s family and $25 million in punitive damages to be shared among Goldman and Nicole's children.