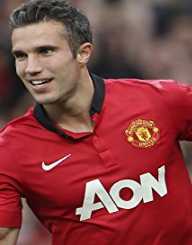 Robin van Persie is one of Netherlands decorated footballers having played in the English Primary League, Dutch League and currently in the Turkish Super Lig. Born on August 6, 1983, he is an integral member of the Dutch National team. Talented as he is, he had an impressive senior career debut with Feyenoord in the 2001-02 season. He won the Dutch Football Talent of the Year after an extraordinary play in the UEFA Cup Final in 2002.

Robin van Persie was born in Rotterdam on August 6, 1983, to Jose Ras and Bob Persie. His father was a sculptor and mother a painter and jewellery designer. He lived with his father after his parents had divorced. Even though van Persie was brought up in a Christian home, he was one of the most misbehaved students at school and was punished almost every day. Robin van Persie is a gifted player by all standards and began playing football at a very young age of five. He started his football career by joining the SBV Excelsior, a local team.

At age 16 and after spending eleven years with SBV Excelsior, Robin van Persie left to join Feyenoord. One year on, he was promoted into the senior team and made his debut at age 17. He made fifteen starts for the team in the 2001-2002 season and won the KNVB Best Young Talent award after playing in the UEFA Cup final in 2002. He signed a three-year professional contract with Feyenoord the following season, but his attitude towards the manager Bert van Marwijk saw his demotion to the reverse side even though he had an impressive season start. At the end of the season, he scored eight goals in 28 appearances.

The 2003-2004 season was not different from the previous; his manager kept on benching him due to disciplinary issues and his form in that season dipped as compared to the 2002-2003 season scoring six goals from 28 match appearances. Robin van Persie was transferred on a £ 2.75 million to Arsenal after the season.

At Arsenal, manager Arsene Wenger successfully converted Robin van Persie from a left winger to centre-forward. He made his Arsenal debut as a substitute in the 2004 FA Community Shield against Manchester United. The game ended 3-1 in favour of Arsenal making him win his debut trophy with the team. Starting most of his 2004-2005 debut from the bench, he scored the opener in Arsenal’s 2-1 win over Manchester City in the League Cup and that was his first competitive match. He finished the season with ten goals in 41 appearances in all competitions.

Unlike a sketchy 2004-2005 season, Robin van Persie started the 2005-2006 season on a good note scoring eight goals in eight matches to earn the Player of the Month award in November 2005. His impressive start made Arsenal extend his contract with 5 years to expire in 2011. Sadly for him, he was injured in an FA Cup match against Cardiff making him spend much of the season on the bench.

His performance in the 2006-2007 season was on the ascendancy gaining him Rotterdam Sportsman of the Year and his magnificent goal against Charlton Athletic being selected as BBC Sport’s Goal of the Month. But once again, Robin van Persie was hit by a metatarsal injury during a celebration of an equaliser goal in a match against Manchester United. He ended that season with 13 goals in all competitions. Van Persie had an impressive career with Arsenals serving the club as vice-captain and later captain and scoring 132 goals to become Arsenal's 8thall-time goal scorer. He also won several awards including the Barclays Player of the Month on several occasions.

At the end of the 2011-2012 season, the Dutchman refused to extend his contract with Arsenal going ahead to sign for Manchester United. His deal with Machester United entailed an initial £22.5 million, with an additional £1.5 million to follow if United won a Premier League or Champions League title within the next four years.

The Dutchman made his debut for Manchester United in the 2012-2013 season as in substitute in a match against Everton and scored his first goal in a 3-2 win against Fulham. His first hat trick also followed on September 2, in a 3-2 victory over Southampton. Robin van Persie was in top form that season and despite picking some injuries, his season ended on an excellent note. His form in the 2013-2014 was also not disappointing scoring some crucial goals for the club. He continued to the 2014-2015 season with ups and down coupled with injuries. His contract was not extended upon expiration, which made him join Fenerbahçe in the Turkish Super Lig

Robin van Persie joined Fenerbahçe in the Turkish Super Lig on July 14, 2015, in a three-year deal amounting £3.84 million. He was assigned the number 10 shirt and made his league debut in a match against Fernando. He has since played in several matches with many of them starting from the bench.

Robin van Persie played at different levels of the Netherlands national teams. He was part of the Under-21 squad that competed at the 2004 European Championship qualifying. He was called to the FIFA World Cup squad preventing him from taking part in the 2006 U-21 European Championship. He made his senior team debut at 2006 FIFA World Cup qualifying game against Romania. The Netherlands qualified to play in the 2006 World Cup, and Van was playing in all four matches at the tournament scored only a goal.

Robin van Persie continued his international feature for the Dutch team at the UEFA Euro 2008 scoring two goals before being eliminated at the quarterfinals round. His other tournaments include 2010 FIFA World Cup scoring a goal, UEFA Euro 2012 and again in the 2014 FIFA World Cup scoring four goals in the tournament. He was also named FIFA man of the match in their game against Spain. His last competition for the national team was at the 2016 UEFA Euro.

Robin Van Persie is married to Bouchra Elbali, a Moroccan. The couple has since been blessed with two children, Shaqueel and Dina. He is of the Christian faith. He has a sponsorship deal with Adidas. One of his personal quotes is “I don't see things the way my parents do. They can look at a tree and see something amazing, whereas I just see a tree. That's not to say I don't appreciate its beauty. When I watch the sea in somewhere like Sardinia, I see the beauty in that. But I think there is a creative connection with my parents. It's hard to explain in words, hard to put my finger on it. But I think football is where my creativity comes out.”