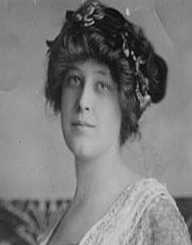 Madeleine Force Astor was born on June 19, 1893, in Brooklyn, New York, United States. She was a prominent figure in America known for her fashionable lifestyle. She was married to Colonel John Jacob Astor IV who was twenty-eight years older than her. Together with her husband on a voyage aboard the RMS Titanic for their honeymoon abroad, John perished in the sinking of the Titanic. She died later on March 27, 1940, in Palm Beach, Florida, United States at the age of forty six.

Madeleine Force Astor was born Madeleine Talmage Force on June 19, 1893, to William Hurlbut Force and Katherine Arvilla Talmage. She was born in Brooklyn, New York, the United States in a family of two children. She was born and raised in a wealthy family who owned several well-established businesses.

Astor attended Miss Ely's School as a child and later educated at Miss Spence’s School for four years. Her early schooling years were marked with brilliance and success as she was an intelligent child. She toured most parts of the world as a child alongside her mother and eldest sister including Europe. As a teen, she had drawn quite a large number of following in the United States for her appearances in several plays in New York. She had become an excellent horsewoman and loved yachting.

Madeleine Force Astor met and got engaged to Colonel John Jacob Astor in August 1911, and the two wedded on September 9, of the same year. However, their marriage raised major concerns and was disputed by many mainly because of their age difference. John was forty seven years old while Madeleine was only nineteen when she got engaged. Issues of class and status also seemed to be a factor that their union could not be supported by many including their parents.

John was also a recent divorcee which the priests purported as being wrong to make such a deliberate fast move hence refused to celebrate their wedding. Amidst the challenges, the couple married and had an extended honeymoon which included visiting several places within their country. In 1912, together with her husband boarded the Olympic and travelled from New York to Egypt and upon their return boarded the RMS Titanic ship.

To be away from all the oppositions and cold reception they received the couple decided to go abroad in search of peace. It was time to return to New York after their stay in Europe and Egypt. On April 10, 1912, the newlywed boarded the Titanic at Cherbourg, France alongside three of their staffs. It was on the fateful night of April 14, 1912, when the RMS Titanic hit an iceberg and began sinking.

John helped his wife to abandon ship to board one of the lifesaver boats and remained to help other women and children to find space in other boats. It was while running this operation that he perished in the sinking ship in the dawning of April 15. Madeleine survived the tragedy alongside other survivors who were on board of lifesaver four and later rescued by the Carpathia Ship crew.

Upon her return to home, Madeleine Force Astor held a Luncheon in May at her mansion to thank the Carpathia ship captain Arthur Rostron and the surgeon Dr. Frank McGee for their heroic efforts in helping the survivors. Mrs. John B. Thayer and Mrs. John Bradley Cumings who survived the tragedy were also present in the event.

Her husband had left her a fortune of about 100,000 US Dollars and an additional 5 million US Dollars on conditions that she would lose these privileges in case she remarried. In 1918 she got remarried to her childhood friend William K. Dick hence losing her late husband’s provisions.

Madeleine Force Astor was first married to Colonel John Jacob Astor IV on September 9, 1911, with whom she has one child. Her husband died in 1912. She married William Karl Dick in 1916 and together had two sons. They divorced on July 21, 1933. She later married a twenty six year old Italian boxer and actor in 1933. They divorced in 1938 with no child together. She died on March 27, 1940, at the age of forty six from heart disease at her home in Palm Beach, Florida.