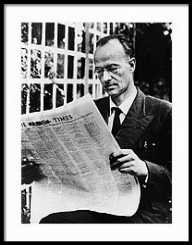 Klaus Fuchs was an Atomic spy and a theoretical physicist. Klaus was one of the most effective in the business and worked for the Soviet Union. From the World war period, Klaus gathered a lot of valuable information from the Manhattan project by America, Canada, and Britain and fed it to the Soviet Union.

As a theoretical Physicist, Klaus Fuchs engineered various calculations that have been linked to the first hydrogen bombs and other nuclear weapons. After working for a while after the war, he was arrested, sentenced and imprisoned for 14 years, and his citizenship revoked due to his espionage. However, he was released for nine years and continued working.

Emil Julius Klaus Fuchs was born on 29th December 1911, in Russelsheim, Grand Duchy of Hesse.Klaus's parents were Emil Fuchs and Else Wagner. Emil worked as a Lutheran Pastor. When growing up, he was often called Klaus. Emil was the third among four siblings, namely Gerhard, Elizabeth, and Kristel.

The family later relocated to Eisenach, and while there, Klaus Fuchs often went to the gymnasium and undertook the Abitur test. At the time, his father Emil was in the `Social democratic party of Germany’ and was employed as a professor of theology in 1912, working at the University of Leipzig.

In 1930, Klaus Fuchs joined his father in the University as a student. Klaus had an interest in politics and hence joined the student's branch of` Social democratic party of Germany’, and became actively involved in the student political scene. Also, Klaus joined the party’s paramilitary group named `Reichbanner Schwarz- Rot-Gold’.Klaus's  father was employed at the `Pedagogical University’ located in Kiel, and Klaus moved with him. In 1931, his mother died after consuming hydrochloric acid in a suicide attempt.

In 1932, Klaus Fuchs's membership in the `SPD’ was terminated. As a result, Klaus soon joined `Communist Party of Germany’ together with his siblings. As a member of the party, Klaus and his brother Gerhard were often outspoken at public gatherings and would interfere with meetings organized by `the National Socialist German Workers Party.’ Adolf Hitler was the presidential candidate for the party in the upcoming elections. In 1933, the Nazis gained control of the state, with Adolf Hitler as the Chancellor. Due to this, Klaus fled Kiel and relocated to Berlin.

Klaus Fuchs fled to Britain and shortly after that; he was ousted from an organization named `Kaiser Wilhelm Institute for physics.’ In Britain, Klaus was employed at the University of Bristol as a research assistant to a physics professor named Nevil Mott.  Under the tutelage of Mott, Klaus attained a Ph.D. in 1937. After that, Mott used his connections and helped Klaus achieve the position of research assistant to Max Born at the University of Edinburg as he latter attained a Doctorate in science. At the time, Klaus family suffered atrocities inflicted by the Nazi government, which also led to various arrests.

In 1939, Klaus Fuchs unsuccessfully tried to attain British citizenship Klaus was then interned by the law enforcers on the Isle of Man and was later transferred to a confinement camp located in Sherbrook, Canada. Max Born influenced Fuchs's release, after which he moved back to Edinburg in early 1941.

During the same year, Klaus Fuchs was invited by Rudolf Peierls to help in an atomic bomb project in the Birmingham University. The project was called the `Tube Alloys.’ The following year, Fuchs finally attained British citizenship and began staying with Rudolf Peierls’s at his home.

By then, Klaus Fuchs had discovered the importance of scientific work, and as a result, he met with a teacher named Jurgen Kuczynski who then familiarized him to a Soviet Union secretary and to a military attaché named Simon Davidovich. Klaus Fuchs then began transmitting valuable information to the Soviet Union through one of their experienced agent named Ruth Kuczynski, with the code name `Sonia.’ Klaus then moved to New York with Rudolf to work on the project `Manhattan Project.’ By now, Klaus was already a Soviet Union agent with Code name `Rest,’ which changed to `Charles’ in 1944.

During the same year, Klaus Fuchs began working as an assistant to Hans Beth at `Los Alamos National Laboratory.’ As Fuchs worked there, he formulated many necessary theoretical calculations.

At the time, Klaus formulated a technique called `Fuchs-Nordheim’ and a blast wave report that have under use to date.Klaus Fuchs's contact then became Harry Gold, with codename `Raymond.’ Through him, Klaus conveyed the information he had gained about the theory of design of the bomb. In 1945 Fuchs became part of the team at the `Trinity test’ alongside several other scientists.

In 1946, the US formulated the Atomic energy act which restricted conveyance of crucial nuclear research information without any authorized permission. However, this did not stop Klaus Fuchs, and he continued conveying vital information to Britain and the Soviet Union.

Klaus Fuchs joined Harwell’s organization called `Atomic Energy research Establishment’ after the war in Britain in 1946 and became its head in the department of theoretical physics. In the period from 1947 to 1949, Klaus conveyed crucial information about the hydrogen bombs and Uranium production to a Soviet spy.

In 1949, a counterintelligence program under the `Verona’ project by United States army discovered that Fuchs was a spy. However, Klaus denied the allegation when formally interviewed by an MI5 agent. Klaus then set up an interview in January 1950 with the same Agent William Skardon and confessed he was an agent.Fuchs was convicted and sentenced to 14 years imprisonment and his British citizenship terminated. Klaus Fuchs was however imprisoned for nine years and released on 23rd June 1959.

Klaus Fuchs got back to his scientific work, and later became part of the `Academy of sciences’ and `SED central committee.’ Fuchs later became the deputy director at `Institute for Nuclear Research in Rossendorf’, where he worked until 1979.

Klaus Fuchs got married to Grete Margarete Keilson in 1959, who had been his friend for long. Grete worked as a politician in Germany.