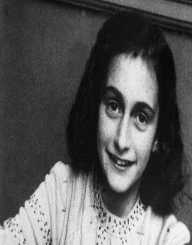 Annelies Marie Frank was born on June 12, 1929, in Frankfurt, Germany, but lived most of her life in Amsterdam, Netherlands. She also had an older sister Margot. The family were liberal Jews and observed the traditional customs only partially. Her father Otto was interested in scholarly pursuits, but both parents encouraged their children to read. The family moved away from Germany when Anne was 4 to 5 years old after Nazis gained control over Germany. Her father started to work at a company in Amsterdam and made all the living arrangements for his family.

Anne showed an aptitude for reading and writing, and she went to a Montessori school. Her sister Margot was better at arithmetic and went to a public school. Anne’s friends later told that she always seemed to write something, but she never shared the content of her writing.

In 1938, Anne’s father started a company Pectacon, which sold herbs, spices and pickling salts for sausage production. In 1940, Germans invaded the Netherlands and began to persecute Jews by implementing strict and discriminatory laws. After that, Nazis started mandatory registration and segregation. Otto tried to arrange the family’s escape to the United States. The option was denied since U.S. government feared that people with family in Germany could be blackmailed to become spies for Nazis.

The Frank sisters were excellent students, but the new laws stated that they could only attend the Jewish school. They were transferred to Jewish Lyceum. Otto Frank tried to prevent his two businesses from being confiscated by resigning as director and signing them over to non-Jews. One of his businesses was soon liquidated, but the other continued working, providing minimal income for Otto to support his family.


The Diary Of Anne Frank

In June 1942, Anne Frank received an autograph book for her birthday, which she decided to use as a diary. She started writing immediately and described a lot of restrictions set for Dutch-Jewish people. The family was planning to go into hiding on July 16, but they received a phone call that Margot has to report for the Central Office for Jewish Emigration to report for her relocation to a work camp.

On July 6, 1942, the family moved into their hiding place - a three-story space which could be entered through her father’s company offices. Otto had a few workers he could trust to help them. They left their previous home with most of their belonging, to create the impression that they have left in a hurry. Otto also left a note indicating that they have moved to Switzerland.

The entrance to the Secret Annex as Anne called a books shelf hid it, and only a few people knew that people are living in the company’s offices. These workers kept the family informed about war news, supplied them with food. The Franks were joined by van Pels family - Herman, Auguste and their son Peter, and by Fritz Pfeffer - a friend of the family. Anne wrote that she was happy having new people around, but tensions grew with every passing day since so many people had to live in such a small space.

Anne Frank wrote a lot about the relationship of the family and their differences. She felt emotionally closest to her father. The two sisters grew close together living in the annex that they had ever been before. Frank had a complicated relationship with her mother. At one point she wrote that she is not a mother to her but later corrected her diary entry.

While in hiding, both sisters continued to do their schoolwork. Anne often wrote about her feelings, ambitions, and beliefs. She also started to write about more mature topics like her belief in God and how she defined human nature. The last entry in her diary was on August 1, 1944.

On the morning of August 4, 1944, the secret annex was stormed by German police, led by SS officer Karl Silberbauer. All people from the annex were taken to the security office for overnight interrogation. Later they were transferred to a prison and then to a transit camp. Since the family was in hiding upon their arrest, they were sent to the Punishment Barracks for hard labor.

The source of information which led for the police to raid the Annex has never been identified. Several people were interviewed after the war ended. There have been many theories about who might have been the potential informer, as well as theories that the discovery of annex was a coincidence while investigating other activities in the company.

On September 3, 1944, the group was deported to Auschwitz concentration camp. Upon arrival, people were separated into groups of men and women, and Otto Frank was taken from his family. People who were unfit for work and younger than 15 were immediately sent to gas chambers. Anne had just turned 15 three months ago and was spared. She was then disinfected, her hair was shaven and was tattooed an ID number on her arm. Women were used as slave labor, and during the day they had to haul rocks and dig sod.

Not long after their arrival, Anne’s and Margot’s skin got badly infected with scabies, and they were sent to the infirmary, which was a dark, stale place infested with rats. Their mother stopped eating, hid her food and was passing it through a hole at the bottom of the infirmary wall.

On October 28, some women were relocated to Bergen-Belsen. Frank sisters were amongst 8,000 women that were transported. Their mother was left behind. She continued to save food for her daughters she believed will come back, and died of starvation.

In Bergen-Belsen, the new prisoners were accommodated in tents. As the population rose, the disease started to spread. A typhus epidemic spread through the camp and killed around 17,000 prisoners. The exact cause of Anne’s death is not known. Margot was said to have fallen out of her bunk and, due to her weak state, died from the shock. After the camp was liberated on April 15, 1945, it was burned down to prevent the spread of typhus. The Frank sisters were buried in a mass grave of unknown location.

Otto Frank survived his time in Auschwitz and later returned to Amsterdam. He attempted to locate his family but soon learned about the death of his wife. He hoped that his daughters had survived, but after several weeks he discovered their death. Her father also tried to locate Anne’s friends and schoolmates.

One of the Frank family helpers, Miep Gies had saved Anne’s diary and other papers, when the family was taken. Otto read his daughter’s diary and was unaware that she had kept such a memoir. Her father decided to publish his daughter’s story. The book Het Achterhuis (The Annex) was first published in 1947 and went on to be world recognized.

The first editions sold more than 100, 000 copies. After her death, Anne Frank became one of the symbols for a holocaust. Her writing style has also been critically well acclaimed. Several claims of the book's authenticity have been made, and in most instances, legal action has been taken to prevent such claims.