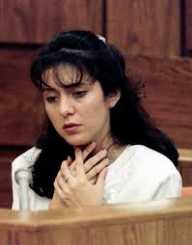 Lorena Bobbitt was born Lorena Gallo in Ecuador on October 31, 1970. She was raised in Venezuela.

In 1987, Lorena Bobbitt was granted a student visa and moved to the United States where she studied at the Northern Virginia Community College.

Lorena Bobbitt was working as a manicurist when she met Lance Corporal John Wayne Bobbitt of Niagara Falls, New York who was serving in the U.S. Army at a marine corps base in Quantico. The couple married on the 18 June 1989 when Lorena was 20, and John Wayne Bobbitt 22 years of age. John was discharged from the U.S. Marines in 1991, and Lorena was the chief breadwinner in the family. The couple would frequently fight with calls made to 911 on several occasions.

Lorena was charged with theft from Bisutti amounting to $7,200, and the couple lost their house to foreclosure. They separated for twelve months, but when they reconciled, their relationship did not improve. She accused her husband of physical and sexual abuse. On the 23 June 1993, the couple were still living together although they had decided to end their marriage. Lorena claimed that John had raped her and when he fell asleep, she physically assaulted him by removing his penis with a kitchen knife.

Lorena Bobbitt then drove to the house of Janna Biscotti, throwing the severed penis out of the window into a field. Biscotti called the police, and they were able to locate the appendage in the field. Medical staff at Prince William Hospital including urologist James Sehn and plastic surgeon David Berman were then able to operate and re-attach the appendage in an operation which took over nine hours.

The Bobbitt case helped highlight the issue of domestic violence in the United States.

After the court case, Lorena Bobbitt spent 45 days in a mental institution where she was evaluated and treated. She later set up  Lorena Gallo Foundation which concentrates on issues of domestic violence. She also spends visiting schools and colleges, giving talks to help educate young people about dating and abusive relationships. In addition to her foundation work, she works as a volunteer at domestic violence shelters in Northern Virginia.