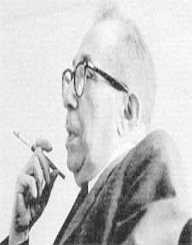 Leo Strauss was a German political philosopher who is best known for his work on classical political theory.

Leo Strauss was born on 20 September 1899 in Kirchhain, Prussia, which was part of the recently formed German Empire. He was the son of Hugo Strauss and Jennie née David. His father ran a farm supply store with Strauss’ uncle. The family was Orthodox Jews who followed ceremonial practices strictly. Strauss was educated at the local volksschule.

During his time in university, Leo Strauss became involved with Jewish groups and Zionist movements. Strauss received his doctorate in 1921. Strauss worked at the Academy of Jewish Research in Berlin until 1931. He then moved to Paris and following the rise of the Nazis in his native country he remained away from Germany for nearly twenty years. He received funding to study at the University of Cambridge in 1935. However, he failed to find permanent employment in the U.K and moved on to America in 1937.

Leo Strauss worked in a series of positions in America. First, he worked in the History Faculty at Columbia University, then working at The New School and Hamilton College. He received a professorship at the University of Chicago in 1949. Strauss’ theories focussed on the symbioses of philosophy and politics. He pointed to the trial of Socrates as the earliest moment of the intertwining of the two. Strauss did not see himself as a great theorist, but rather as a scholar of the works of better philosophers.

Leo Strauss chronicled the development of the idea of the natural rights. He focussed on the works of Socrates, Plato, Aristotle and the Enlightenment thinkers, Thomas Hobbes and John Locke. Strauss was also critical of Rousseau and Edmund Burke in his writings. Strauss, in particular, praised German philosopher Friedrich Nietzsche and his focus on historicism.

Historicism meant a philosopher looked at an event through the prism of its position in history and geography. It was mainly popular with nineteenth-century German philosophers such as Marx. Strauss put forward the idea that all serious academic philosophy is written esoterically in his book, Persecution and the Art of Writing. This style was used to protect the writer from authorities who might disagree with their writings. Strauss also claims it was used to prevent the unintelligible reader accessing the real message of work.

Leo Strauss was also deeply interested in how to combine individual freedom with political excellence. He rejected the view that individual liberty is the end goal of political philosophy. Strauss felt that the liberalism of the Enlightenment had led Western societies down the path of nihilism. The first path was a totalitarian nihilism that sought to destroy all other forms of thought. This brutal nihilism took hold in Nazi Germany and Soviet Russia. The second form of nihilism was the hedonistic aimlessness that took hold in the liberal democracies of the West.

Leo Strauss married Marie Bernsohn while working in Paris. The two had known each other previously from Germany. They had no children together, but Strauss would adopt Marie’s son, Thomas. He also later adopted the children of his sister when she died. Strauss died of pneumonia on 13 October 1973 while living in Annapolis in California.